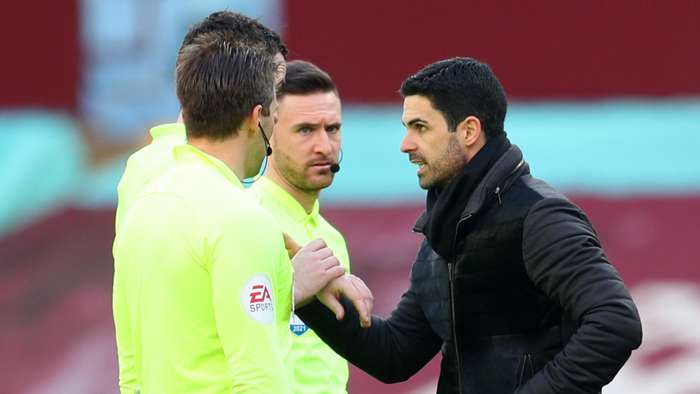 An angry Mikel Arteta opted to keep his mouth shut rather than taking aim at the officials after Arsenal’s 1-0 defeat at Aston Villa on Saturday.

Arteta felt Villa defender Ezri Konsa should have been sent off for bringing down Bukayo Saka as the young Arsenal forward raced towards goal during the first half at Villa.

And he was infuriated again after the break when EmiMartinez appeared to pull Alexandre Lacazette to the ground as a corner was swung in, only for the foul to go against the Arsenal striker.

But, speaking after the defeat, Arsenal’s 10th in 23 league games this season, Arteta decided to keep his opinions to himself, when asked about the decisions.

“I keep that between me and them,” he replied, when asked what he said to the officials after the game.”

And when asked on the decisions themselves, the Arsenal boss added: “I prefer to stay on mute on that.

“As you could see, I was really animated for a few decisions and one big decision I will not discuss here as well, what happened.

“It is what it is. It is not an excuse, Regardless of those decisions, we have to win the game. It is as simple as that.”

Arsenal dominated possession for large periods against Villa but struggled to turn their superiority into clear chances.

Having gone behind to an Ollie Watkins goal inside two minutes, the visitors mustered just three shots on target as they slipped to a second successive league defeat.

“We completely dominated the game,” said Arteta. “We dominated every department and we should have won the game.

“But in the Premier League when you give a goal just to the opponent and we gave them another three opportunities, and then you are not ruthless enough in the opponents' box, you don’t win games.

“The rest, the way the team played, the energy and quality they showed, the amount of chances and situations we created, how quickly we regained the ball, how we controlled the long ball, second balls, how aggressive we were in our duels, incredible. But it wasn’t enough to win the game.

“If we are not ruthless, we must not give anything to the opponents. That is something we must do better and it cost us two games in the last four days because the reality is we should have won both games.”

Arteta added: “We have to come back, we have done it this season.