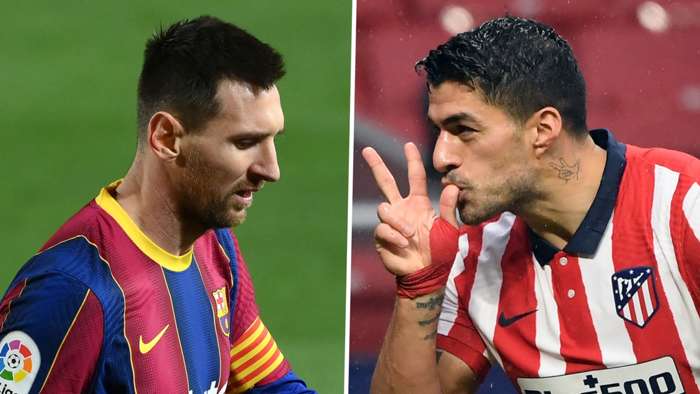 The past week has seen Camp Nou aflutter over the revelations leaked to El Mundo regarding Lionel Messi's astronomic salary package at Barcelona.

But the report has nevertheless reheated the bad blood that has surrounded the Catalans and Messi ever since his shock exit request last summer.

Such largesse has been held up as just another piece of evidence pointing towards the chronic mismanagement of the Liga giants over the last few years – but arguably, the handling of Messi aside, ex-president Josep Bartomeu's greatest error can be found not in Barcelona, but just over 300 miles away in Spain's capital.

While the Barca world did its best to weather the weekend storm, Luis Suarez was once again doing what he does best.

The Uruguayan, Messi's team-mate and partner-in-crime for six yearsuntil he was unceremoniously informed he had no future under new coach Ronald Koeman,took his Liga goal tally to 14 on Sunday to help Atletico to a 4-2 defeat of Cadiz, their eighth straight league victory.

That run has helped Atletico run up a 10-point lead over the Blaugrana and arch-rivals Real Madrid, a gap that could grow even wider with a win in the club's game in hand later in February.

Suarez, La Liga's top scorer, has been at the forefront of their title tilt; making Barca's decision to gift the star to a direct title rival, and even pay a significant portion of his salary into the bargain, look very foolish indeed.

“They've done things very badly,” Angel Correa, Suarez's Atletico companion and a team-mate of Messi's with Argentina, told TyC Sports on Tuesday when asked of the situation at Barca. “First, how can you let a No.9 who wins games for you like Suarez slip through your fingers?”

“We are happy because we have him with us. We watch Barcelona from the outside and you can tell things are being handled badly.”

One of Suarez's goals at the weekend came from a fantastic free-kick effort, a side of the Uruguayan's game which has been largely hidden for the past few seasons as a result of Messi's expertise in that department. “The thing is, being at Barca so long, and Leo was there...” he revealed to reporters after the game.

Aside from that bombshell, there is nothing particularly novel or surprising to what he has achieved to date.

At 34, Suarez may not be the same all-action forward he was at his prime, as his physical attributes have declined. But when it comes to grinding out Liga results and making teams pay week-in, week-out, he has few rivals.

Certainly, nobody on the current Barcelona roster has stepped up to cover his absence. After Messi, who trails his great friend by two goals in the race for top scorer, not one player has managed to break double figures in the league.

Antoine Griezmann comesclosest back on six and Martin Braithwaite, the closest thing to an orthodox centre-forward in Koeman's squad, has nettedjust twice in 17 appearances.

As a result ofthose failings, and Madrid's chronic inconsistency over the current season, few would bet against Suarez picking up a fifth Primera Divisiontitle; while he needs just one more strike to break 15 Liga goals for a seventh consecutive term since landing in Barcelona in 2014.

All of Atletico's squad have done their bit to make this thus far a spectacular season for Diego Simeone's men –the first since losing long-time right-hand man German Burgos. In 19 outings, the club have dropped just seven points, while El Cholo's notoriously miserly defence has conceded just 10 times (compared to the 18 shipped by Real and Barca).

Still, the Colchoneros can barely believe their good fortune in picking up such an accomplished forward. Jan Oblak echoed Correa's words this week when speaking to El Larguero: “It really surprised me. I think everyone was surprised due to the kind of player he is, the goals he scores every season, all the goals he scored for Barcelona.

For 2021-22, it seems the club and its players will aim even higher with Messi's contract expiring the summer.“Messi knows the doors are open to him here,” Correa added when asked about the Argentine wizard's future. “Who wouldn't want Messi in their team?”

The positive atmosphere around the Wanda Metropolitano contrasts strongly with the ongoing soap opera that has enveloped Barcelona these past six months, and which took another twist with the leaking of Messi's contract and the ensuing uproar.

In truth, the Blaugrana were in need of renewal at centre-forward as Suarez grew older, but releasing him to a fellow title challenger and with no replacement in sight was an act just as irresponsible as mortgaging the club's future to the tune of half a billion euros.