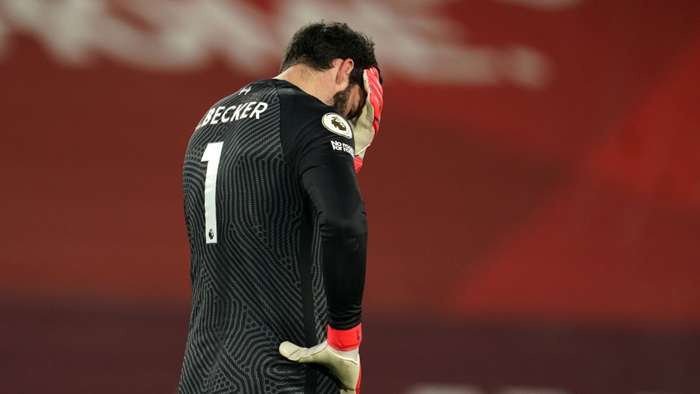 Liverpool goalkeeper Alisson came under fire on Sunday after the normally-steady Brazilian made two costly mistakes against Manchester City at Anfield.

After Ilkay Gundogan missed a penalty in the first half, the German midfielder made amends early in the second to open the scoring.

Liverpool fired back with a spot kick from Mohamed Salah, butAlisson was at the centre of the Reds' collapse, with his first shocker coming in the 73rd minute.

The Brazilian No1's attempt to play out of the back quickly went wrong, as his pass found Phil Fodenwho teed up Gundogan for his second.

Moments later, Alisson's passing ability let him down once again as he served Bernardo Silva before the Portuguese star's cross to Raheem Sterling.

The two mistakes ensured that Alisson became the first Liverpool goalkeeper to make two errors leading directly to a goal in a single game since Loris Karius vs Real Madrid in the infamous 2018 Champions League final.

"It was bizarre, the kind of thing we associate with a distant Liverpool era. The game in the balance, there to be won. Tight and edgy, tense - then a goalkeeper takes centre stage.

"Alisson Becker’s errors were as remarkable as they were costly. They certainly cost Liverpool any chance of a result here. Their title dreams are in tatters.

"What was the Brazilian doing? It was shocking, so out of character. He’s one of the best in the world, but he was anything but here. His two shoddy clearances allowed City to race off into the distance.

"In a season where so much has gone wrong for Liverpool, this was rock bottom. If they can’t rely on their No 1, who’s left?"