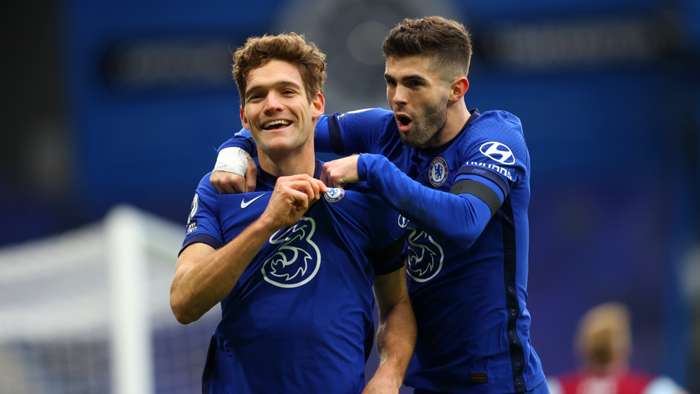 Marcos Alonso is setting his sights on “the top” after edging back in front of Ben Chilwell in the Chelsea pecking order under Thomas Tuchel.

Big money was invested by the Blues in England international Chilwell during the summer of 2020, leading to Alonso seeing just three Premier League appearances at the start of the season.

Once Chilwell stepped into the side, Alonso found himself on the outside looking in and facing plenty of speculation regarding his future.

The 30-year-old did, however, make a first 90-minute outing in 19 weeks as Tuchel shuffled his pack for hissecond game as Lampard’s successor.

Alonso found the target in the2-0 victory over Burnleywith a spectacular strike to wrap up that win, and he is now setting lofty targets for the remainder of the campaign.

He told Chelsea’s official website after returning to form and favour: “We knew it would be dangerous against this team with the long balls and set-pieces so I was there to help. It’s been a while since I played but I’ve been working hard and I’m just happy that I was ready.

“A lot of things have been said out there but I like to work, be quiet and talk on the pitch so that was for the fans. It’s good to get the reward and hopefully there will be more to come.

“It was good to help the team with a goal but I’m just delighted for the three points and very happy for the team. We need to get back to the top, or as close to the top as possible, and today was a good start.”

Alonso, who has been deployed as a left wing-back on a regular basis throughout his career, has always been capable of making an impact at both ends of the field.

He hopes those qualities will continue to be put to good use, with Chelsea looking to force their way back into top-four contention after enduring a wobble that brought an end to Lampard’s reign.

“I have more freedom to attack because we are better covered for defending but it’s not about the system,” Alonso added. “When we play more organised, all together, knowing what to do and where to be on the pitch then this team has great potential to achieve big things.

“We have a long way until the end of the season to show that and prove we deserve a better position in the table than where we are now but we have to fight for it.”