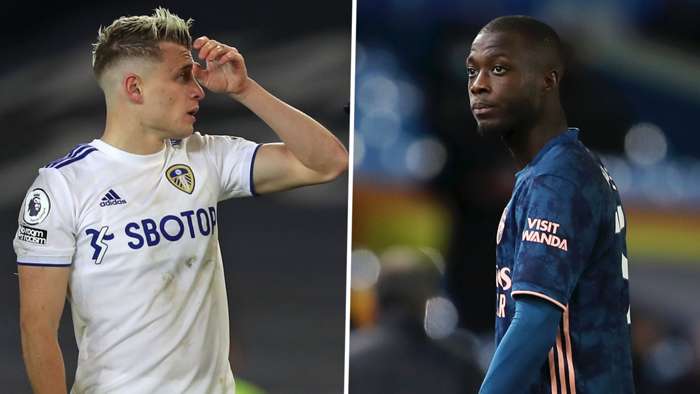 Ezgjan Alioski “can’t wait” to lock horns with Nicolas Pepe again, claims Patrick Bamford, with the Leeds defender contributing to the Arsenal forward being sent off in their last encounter.

Back in November, during an eventful 0-0 draw at Elland Road, the Gunners saw their Ivorian winger dismissed after butting heads with theWhites full-back.

Alioski came in for criticism on the back of that incident, with the Macedonian accused of going to ground too easily, but the enigmatic 28-year-old is looking forward to renewing acquaintances with Pepe.

Discussing Alioski on the official Leeds United podcast, Bamford revealed: “Do you know what he said in the changing room the other day?

On November 22, 2020, Leeds played host to Arsenal looking to put another marker down against a Premier League heavyweight.

It appeared as though everything was working in their favour when Pepe was dismissed just six minutes into the second-half.

He reacted to goading from Alioski, with the pair coming together off the ball.

Pepe took issue with that and proceeded to squareup to his rival before pushing his head towards the Leeds defender.

Alioski went down clutching his face and, despite the incident not being spotted by the match officials, a red card was delivered on the back of a VAR review.

Theatrics from the Whites full-back generated plenty of post-match debate, but Pepe also faced criticism for falling into a trap that he had no need to approach.

A return date between Arsenal and Leeds at Emirates Stadium on Sunday will see the hosts attempt to snap out of a three-match winless run in the Premier League that has delivered just one point from the last nine on offer.

Marcelo Bielsa’s Whites have been faring a little better, winning three of their last four, and are now sat one place and a solitary point above the Gunners in the English top-flight table.