Miedema is no flat-track bully: Arsenal's big-game struggles are about more than the under-fire forward 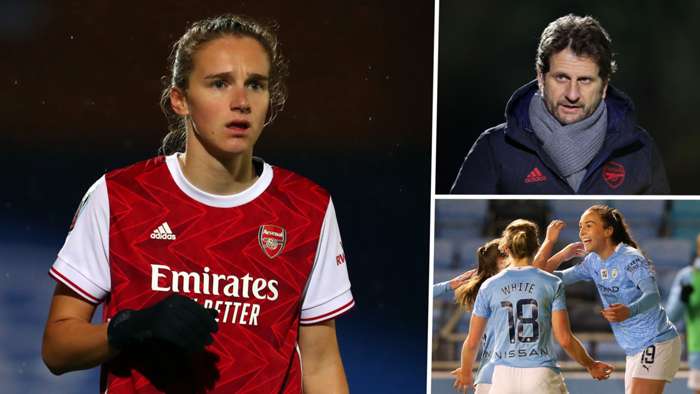 When Arsenal welcome Manchester City on Sunday, the odds will be stacked against them as they try to re-establish themselves in the title race.

This weekend’s game, and the clash with Chelsea that follows on Wednesday night, are huge for Joe Montemurro’s side.

But big games are for big players, and Arsenal have one of the biggest in Vivianne Miedema.

The 24-year-old is one of the top talentson the planet, a European champion and World Cup finalist, as well as the WSL's all-time top-scorer.

It’s no wonder, then, that when these big games come around, two defenders are regularly following her every move.

Their attempts to mark her out of the game have earned Miedema an unfair reputation among rival fans as a flat-track bully, despite her more than respectful record of eight goals and three assists in 19 games against City and Chelsea.

“I do enjoy that challenge,” Miedema told Goal in November, after finishing second in Goal 50.

“It's a good thing because it means that I need to find ways to keep improving myself, which I like because that'swhy you want to play football.

“A lot of the teams are trying to man-mark me or whatever, so I always need to find a different way around it in every single game and it's a good opportunity for me to develop myself.”

When she does break free, it’s telling. Against Chelsea in November, she found space out wide to supply a brilliant assist for Beth Mead as the Gunners came within seconds of a huge win, only to be denied as much by the cruellest of own goals from Lotte Wubben-Moy.

Crucially, when she scores against Manchester City, the Gunners tend to win, too. The only timethat wasn'tthe case was in December, when her opening goal was rendered futile by City’s comeback in a 2-1 defeat.

“The situation develops like that, where there is an advanced or forward opportunity in nullifying Viv,” Montemurro said this week.

“We've worked at spaces she can take up where maybe she's going to be a little bit more difficult to mark but that frees up the opportunity for other players to be involved.

“In these games, there's probably more transition moments than having the ball. It's a matter of identifying that moment and making sure that we find space for Viv or one of our other players to be able attack.”

But, as Montemurro alludes to, Arsenal cannot just rely on Miedema in these huge fixtures.

Captain Kim Little acknowledged in October that the team needed to “be better”, given they'renow winless in six against City and Chelsea.

“It's really disappointing to lose those matches,” she said,with the Gunners having just lost in the FA Cup semi-finals to City and in the Continental Cup to Chelsea.

“We want to go to them and get a result. I think of previous games playing them as well, we've not matched them the way we wanted.

“As players, we know we need to take responsibility forhow we performed in those games. We all, collectively and as individuals, need to be better and we believe if we play to our potential, we will impact those matches in a better way and get results.”

It’s just short of two months since Arsenal lost to City, despite taking the lead in the third minute of the game with Miedema’s strike from the edge of the box.

In the end, it was game management that cost the Gunners, with Montemurro admitting as much after his team succumbed to a 90th-minute goal.

“They're big games that have moments,” he said this week, reflecting on that game. “It's just managing those pressure moments.

“We try to do the best we can to simulate these moments. When it's a wondergoal in the last throes of the game, we learn that we have to be a little bit cleverer in closing out games when you're under a little bit of pressure like that.

“Hopefully, if that situation happens again, we can make sure that we do the right thing.”

If Miedema can pop up with another important contribution on Sunday, it could be pivotal as Arsenal try to claw back the deficit they face heading into a huge few days.