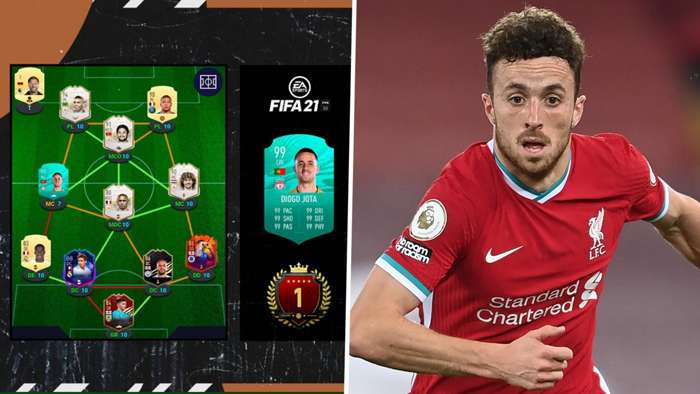 Liverpool star Diogo Jota has been out of action since December with a knee injury, but that hasn't stopped the attacker from showcasing his skills off the pitch as he sensationally topped FIFA 21's FUT Champions leaderboard this weekend.

Indeed, team-mates Alex Oxlade-Chamberlain and Andy Robertson were recently quizzed on whether Trent Alexander-Arnold was the best gamer in the Liverpool squad, with the former telling Sky Sports: “Jots. Jots has gone 30 games unbeaten in the Weekend League which is just stupid, isn't it?So it's got to be him.”

“Since my dad gave me my first PlayStation as a kid, it's been like another passion of mine. I always played football on it,” the former Wolves favourite told The Athletic in December of last year.

And if you're wondering what players and formation Jota uses, it can be found below.

Leading the line in a 4-3-1-2 set-up, Brazil icon Ronaldo lines up next to Paris Saint-Germain's Kylian Mbappe, with the fearsome duo being ably backed up by former Portugal great Eusebio in attacking midfield.

Ruud Gullit and Patrick Vieira icons are joined in the centre of the pitch by Jota himself, although the card he uses is a boosted version of the original made exclusively for the player by EA Sports and is ranked at 99 for all stats.