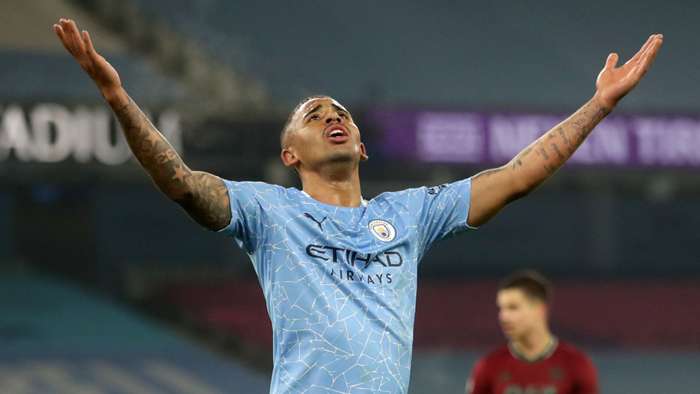 At the Etihad on Tuesday night, Wolves came as close as anyone over the past four months to putting the brakes on their hosts'incredible winning run, yet somehow still ended up losing by a three-goal margin.

It’s now 21 winson the bounce for City, a club record-equalling 28 matches unbeaten and, most importantly of all, a 15-point lead over Manchester United at the top of the Premier League.

However, with 10 minutes remaining, Pep Guardiola was stalking his technical box in frustration, with his team having been pegged back by Conor Coady's shockequaliserafter squandering a succession of chances.

City just kept drivingforward relentlessly, though, and, eventually, the ball dropped to Gabriel Jesus just outside the six-yard box, allowingthe Brazilian to smashCity back in front.

Riyad Mahrez and Jesus again added two more goals to make it 4-1, effectively punishingWolves for pushing them so hard.

This was a fine illustration of the winning spirit that Guardiola has createdand the squad were united in appreciation of each other’s hard work as they all embraced at the full-time whistle.

Both Wolves and Sunday’s opponents,United, had won at the Etihad last season, so these two fixtures arguably represented the final obstacles on City's march to the title.

Certainly, Nuno Espirito Santo has as good an idea as anyone on how to stop City –the Wolves boss had only lost once in his three previous visitsand did the double over themlast season.

In fact, no Premier League club has been more successfulagainst Guardiola’s side over the past three years than Wolves.

The Portuguese manager has a gameplan, instructing his players to soak up City’s incessant pressure and catch them out on the break.

It's obviously worked well for Wolvesin the past but even hewould have to admit his side were riding their luck with their rope-a-dope performance on Tuesday.

City had 80 per cent possession in the first half and deservedly led at the break thanks toLeander Dendoncker’s own goal.

It would have been 2-0, too,had Aymeric Laporte’s header not been ruled out for one of those infamous armpit offside calls to which we've all sadly grown accustomed.

Wolves rarely threatened on the break either, as they struggled to retain possession because of the constant harrying byCity's midfielders Rodri, Jonny and Kevin De Bruyne.

Indeed, the visitors barelycrossed the halfway line and certainly never looked like scoring, as underlined by the fact that they registered no touches in their opponents' box during a painfully one-sided first half.

However, Wolves stunned City by netting with their first effort on goal, in the 61st minute, whenCoady headedin Joao Moutinho’s deep free-kick.

City, unsurprisingly, came storming back in search of a winner. Jesus missed two glorious chances, Rui Patricio made an incredible save from De Bruyne and Raheem Sterling hit the post.

Yet despite Wolves' bravery and City's misfortune, there remained an inevitability about the home side's victory. It was impossible to escape the suspicionthatthe goal wouldcome.

And it did, along with two others.From 1-1 to 4-1 in the space of 10 minutes thanks to City found another gear late on.

The title is virtually theirs now but when pressed on the matter afterwards by BT Sport, Guardiola insisted his sole focus is City's next game:"Manchester United – that's all we care about."