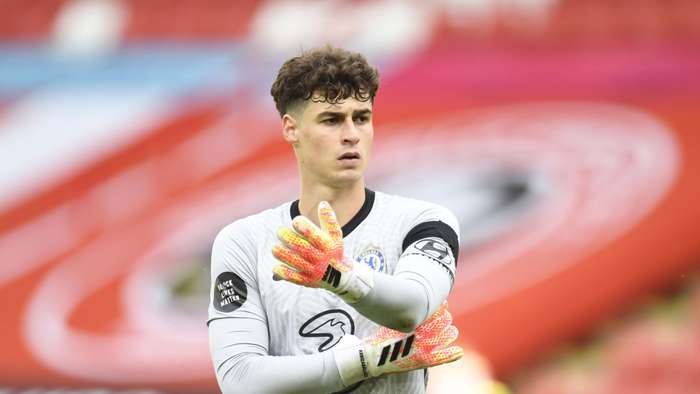 Thomas Tuchel is ready to give goalkeeper Kepa Arrizabalaga his first start under him against Barnsley in the FA Cup, and a clean slate after his struggles under Frank Lampard over the last 18 months.

However, Tuchel wants his arrival to mark a turning point for the Spain international and has left open the possibility that he could become the first choice again.

"Absolutely, absolutely," Tuchel replied when asked if he thinks Kepa can kickstart his Chelsea career. "He will play tomorrow; he will start tomorrow. From outside, we had a view on his situation and saw some difficulties on the sporting side.

"Maybe also the circumstances of his transfer is weighing a little bit on his shoulders. That was the impression from outside.

"From inside, I see a nice guy. I see a nice personality, an open character, a hard-working guy, with obviously a lot of quality. So the good thing for him is that we start fresh, it's a new start for him. I don't have a history with him and I hope there will be no difficulties because I don't see them coming.

"He's a clear guy, an open guy. He does everything to impress in training. I'm happy and I feel all three goalkeepers in a good atmosphere, they are competitors to each other, it's a very special position in football of course, it's a very decisive position, it has its own rules.

"If you make mistakes everybody sees them and talks about them. So you need a lot of mental strength and quality and I see this in all three goalkeepers. Kepa has a chance tomorrow and I hope he can show what he shows in training.

"We didn't make a change in the first game and Edou Mendy was strong in the moment. So tomorrow is an opportunity to show and hopefully, it's very important for me to say this, he doesn't want to overachieve. I want him to do a normal match tomorrow.

"He does not have to show me or anybody else tomorrow that he is ready to be Spain's No 1 in the summer. He just has to show his quality. Not more or less. So we have to manage expectations because I don't expect him to score and keep a clean sheet.

"I just want him to help us with his quality and he gives a solid performance to help the team. He has big goals to achieve and personal ambition. This is normal; it's why he's here."

Chelsea are understood to have been open about letting Kepa go on loan or in a permanent deal in the last two transfer windows but his high wageshave blocked potential suitors.

Tuchel explained that the club may want a return on investment from Kepa and their other signings, but he wants the 26-year-old to forget his price tag.

"No matter if we bought them for crazy money if they come through the academy, or they were a free agent when they arrived, it is our job to push every player to the limit, this is what counts," Tuchel added.

"We are pretty selfish. Why? Because we want to have them in the best shape on the pitch. Of course, the club wants the market value kept the same or increased, but for me, we want the guy in the best shape and we want competition in every position."

The Blues will use their FA Cup tie with Championship club Barnsley as a chance to give minutes fringe players beyond Kepa. Hakim Ziyech and N'Golo Kante have already beenconfirmed in the line up for tomorrow.

Tuchel also said there was a "big chance"that Billy Gilmour would start, while Christian Pulisic has been training with the squad after missing the trip to Sheffield United through 'personal reasons'.

However, Chelsea will use this as a chance to rest Werner who has a dead leg from winning the match-winning penalty on Sunday against Chris Wilder's side.

"It is still painful with contact so we took him out of half of the training today when we did some small-sided games and the possession games," he added.

"We didn't risk it today and we will not risk it tomorrow. We could have risked it but the decision stands. Hopefully, he will recover and be back on Monday to face Newcastle."

A number of academy prospects may also get a chance at Oakwell, including Tino Anjorin and Lewis Bate, who have travelled to be part of the squad.

How to solve a problem like Kepa: Chelsea facing expensive goalkeeper conundrum