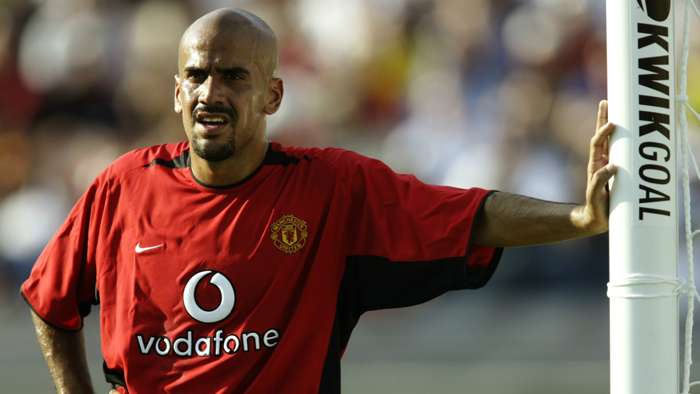 Juan Sebastian Veron has insisted that he harbours no regrets over his ill-fated spell at Manchester United, having "found an extraordinary club" after deciding to leave Italy.

Although the former Argentina international acknowledges the fact he failed to live up to expectations during his time with the Red Devils, he still looks back on his time with the club fondly after being pleasantly surprised by the lifestyle he was able to adopt in England.

Asked if he laments swapping Rome for Manchester at the height of his playing career, Veron told FourFourTwo magazine:"No, never. I signed for United because I had a passport issue in Italy and thought a change of scenery would be good for my mind.

"Truth be told, I had a pessimistic view about playing in England, as I imagined that life there would be so different to what I was used to: the Latin lifestyle. But I found an extraordinary club. You could hardly find one as well-organised, with so many people willing to help.

"If there was one thing that played against me, I’d say it was the physical conditioning.As we played more matches, my performance levels dropped. I had so many up and downs: a few really good games, but other poor ones.

"I know that my time in English football wasn’t the best."

Veron racked up 82 appearances across all competitionsfor United before being sold to Chelsea after the club's title-winning 2002-03 campaign.

The playmaker contributed a total of 11 goals and 11 assists to the Red Devils' cause during that period, but only found the net twice in 25 Premier League outings during his final season on their books.

Veron was only the most expensive signing in United's history for a short while, with club officials breaking the bank to bring in Rio Ferdinand from Leeds United for £30 millionin July 2002.

Dimitar Berbatov,Juan Mata andAngel Di Maria were also subsequently acquired for record fees, but Paul Pogba's return to Manchester from Juventus in 2016 saw him set a new mark of £89 million which has yet to be surpassed.