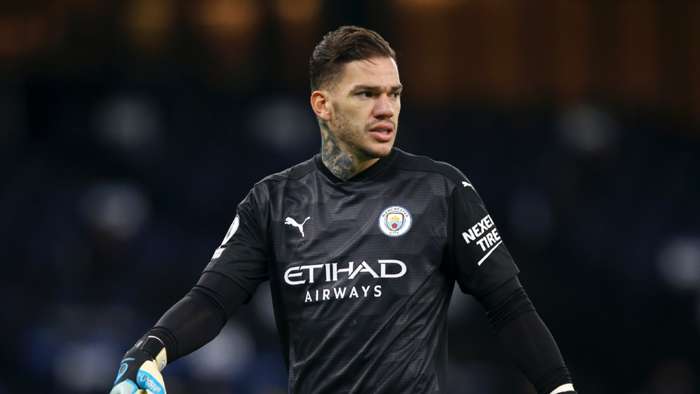 Pep Guardiola says he will consider making Ederson the team's penalty taker after midfielder Ilkay Gundogan missed from the spot against Liverpool on Sunday.

Gundogan stepped up, but his spot kick was skied up and over the bar and into the Kop, leaving the score level headed into the second half.

City wouldn't rue the miss, as Guardiola's side notched a 4-1 win thanks to two Alisson blunders and a pair of goals from Gundogan, who earned his redemption in the second half.

Gundogan's miss, however, was still a bit of a concern for Guardiola, who has used four different penalty takers this season.

In total, City have made four and missed three from the spot this season, with Kevin De Bruyne and Raheem Sterling also failing to convert.

Guardiola has previously claimed that Ederson is the best penalty taker at the club, with Ederson also saying that he believes that he is Manchester City's most consistent from the spot.

Ederson has also claimed that Guardiola will not let him step up, butthe Spanish coach admitted on Sunday that he may actually turn to the goalkeeper following Gundogan's miss.

"A lot of emotions, many things happening in the game," Guardiola told BBC. "Gundogan missed a penalty, it's like a routine against them, but we started really really well, doing what we want to do. In the second half, the way we react to the goal, the way we played with quality made the difference.

"We knew that we should continue with what we have done the last month or two months, and that's what we did well... For many years we were not able to win here, hopefully next time we can do it with people. Anfield is so intimidating."

He added: "It's a problem that we have. In important moments, we cannot miss it, and it doesn't matter the taker. Again, I'm going to think about Ederson, he might be the taker next time."