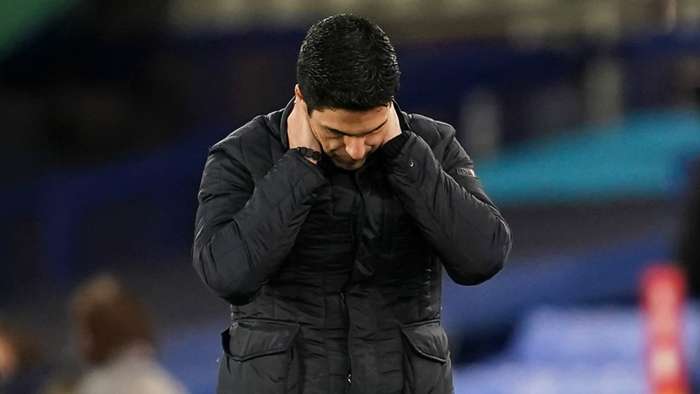 Mikel Arteta was left to rue another costly mistake from Arsenal in their 1-0 defeat at Aston Villa, with the Gunners boss considering his side to have been “the better team”.

Cedric Soares played Gabriel Magalhaes into trouble early on with a stray pass, allowing Bertrand Traore to steal in and drive towards the box.

His clever flick teed up Ollie Watkins, with a deflected effort squeezing past debutant Mat Ryan in the Arsenal goal.

Arteta saw his side toil in pursuit of an equaliser, with clear-cut chances proving to be in short supply, and finds himself mulling over more self-inflicted misery on the back of a 2-1 defeat at Wolves that saw the Gunners finish with nine men.

“We just gave them the ball, a moment you make a mistake and they punish you,” Arteta told BBC Sport.

“You cannot win football matches if every week you do something like that. Four or five times we’ve played with 10 men. Against Wolves, we deserved to win both games by far but we lost both.

“Red cards cost us that game against Wolves - today other big decisions. Regardless of what the referee did today we should win the game comfortably.”

The Arsenal bench took issue with a number of decisions from the match officials in the West Midlands, with there a feeling that big calls were not going their way.

The Gunners were, however, unable to do enough to haul themselves back into a fixture that started in the worst possible way.

Arteta believes his side would have been good value for a point, with the Spaniard adding: “I’m extremely disappointed to lose and the way we lost it. We were the better team.

“We controlled every department but we gave them the ball. We gave them another three big chances. Then when we had to score the goal, we didn’t find the right pass or the right shot.

“They were better in the boxes and that’s how you win games. We created enough opportunities. We didn’t score, we cannot win the game.”