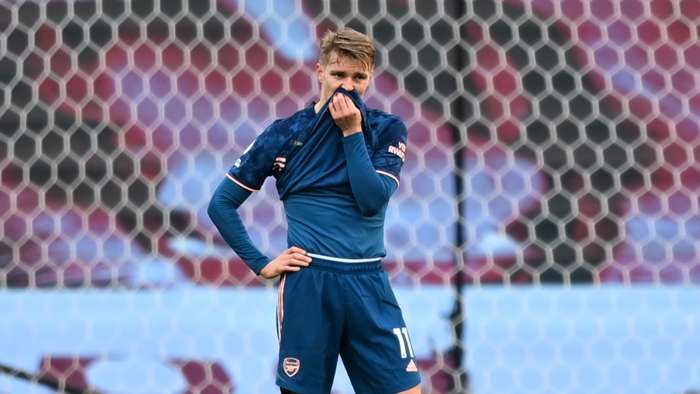 Arsenal have hit a 37-year low on the back of their 1-0 defeat at Aston Villa, with Mikel Arteta’s side reaching double figures for the season when it comes to Premier League defeats.

Back then, Arsenal took just 17 games to come unstuck on 10 occasions and, while they have fared marginally better this time out, inconsistency has remained an issue for the north London outfit.

Arteta saw his side struggle once again during a trip to Villa Park on Saturday, with a slow start costing the Gunners dear.

Arsenal have now suffered back-to-back defeats, with a promising six-game unbeaten run brought to shuddering halt in a loss at Wolves which saw them end the game with nine men.

No positive response was offered against Villa, with minds now being cast back to the 1980s when it comes to regular reversals.

The Gunners’ cause was not helped against the Villans as they conceded inside 74 seconds.

A stray pass from Cedric Soares allowed Bertrand Traore to steal in and tee up Ollie Watkins, whoseclose-range effort took a deflection off Rob Holding on its way in, with Mat Ryan left with no chance.

The Australian goalkeeper was making his debut for the Gunners and has become the fourth keeper in Premier League history to concede on his bow inside two minutes.

Arsenal did look livelier in the second half against Villa than they did in the first, but there was to be no way through.

The Gunners have now suffered three consecutive league defeats to the Villans without finding the target for the first time since between August 1920 and March 1922.

It is also the first time since the inaugural Premier League campaign in 1992-93 that Villa have completed a top-flight double over Arsenal – with Ron Atkinson calling the shots back then.