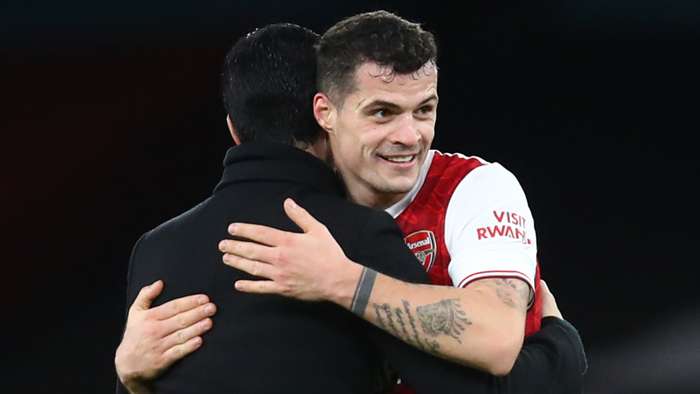 Xhaka believes that Arsenal’s struggles along the way have been down to individual failings rather than problems with Arteta’s overall approach – so things will keep improving if they can cutout those mistakes.

“We had the run without wins but even during that time, I think we have played without any self-doubt,” Xhaka told the Guardian.

“Our mistakes, like the red cards – my own included – have been the fault of each of us rather than one with the plan. As a collective, we’ve been functioning well and we can do something special, including this season.

“We are playing a very tight, compact game of late and we are also gleaning a lot of respect from the other big teams we are playing. I think we are bound for glory.”

Xhaka himself came very close to leaving Arsenal before Arteta arrived, holding talks with Bundesliga side Hertha Berlin after publicly falling out with fans.

The Swiss international says he had never met Arteta before he replaced Unai Emery as manager, but he has been hugely impressed with what he has seen.

“I have to say it was the first time I had met him; I had no prior knowledge of him as a man or a coach. But we had a really great one-to-one chat – very open, very positive, very long.

“He looked deep into me, into my thinking, and he persuaded me that we should go on together, stick with each other on this Arsenal project. I am happy that I made the decision.

“Mikel is an unbelievably good coach who puts a huge amount of detail into his work. We have individual discussions for every match, a plan about what is expected for that game. He even hands out an individual match plan to each player. We are always very well prepared for our opponents.

“The individual work he does with every player – that’s the trick. And after the match, there is a very detailed analysis of what’s been done. Who was where.