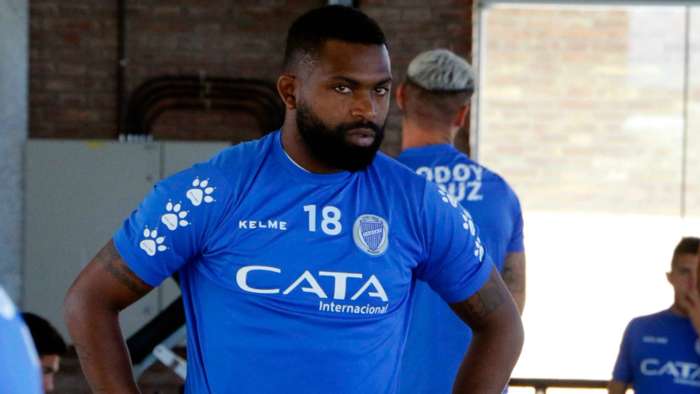 News of the 30-year-old's passing provoked an outbreak of mourning in both Garcia's native Uruguay and across Argentina, where his exploits had made him a cult hero.

Godoy Cruz fans flocked to pay tribute to their idol, while the circumstances of his death opened up one of football's most sensitive debates: how the sport must care for its employees' mental, as well as physical health.

Garcia grew up in the Barrio Colon neighbourhood on the impoverished fringes of Montevideo, and as a youngster was snapped up by Uruguayan giants Nacional, the same club that produced Luis Suarez.

In 2008, two years after Suarez had left Montevideo for the Netherlands, a 17-year-old Garcia marked his first-team debut with a goal against Defensor Sporting, and quickly became a prodigious scorer for his boyhood club.

The 2010 Apertura saw Garcia net 15 in as many games, while the following year he added eight to his tally in the Clausura to lead Nacional to the title while also scoringthree times in the Copa Libertadores, including a famous double to down Fluminense at Parque Central.

That early promise, coupled with a fantastic showing at the 2009 South American Under-20 Championship, where he hit three goals alongside fellow hotshot Abel Hernandez, led Garcia to be labelled Uruguay's next great forward, a worthy challenger to the likes of Suarez and Edinson Cavani up front.

Blessed with explosive pace that belied his powerful build, proficient in shooting off both feet and a constant menace in the air, the sky appeared to be the limit for Nacional's young superstar.

El Morro, as he was universally known,completed a move to Brazil's Atletico Paranaense,at the end of 2011.

There, it emerged that Garcia had tested positive for cocainefollowing that year's Uruguayan Primera Division final against Defensor Sporting. While he faced no suspension outside of his home nation, the news shattered the youngster's confidence.

“There was a moment in which I thought about leaving football,” he admitted to Tyc Sports in 2018. “It got to such a point that one day my brother opened my door and saw how I was living: I didn't turn any lights on, I was totally depressed and I didn't want to play football anymore.

“In Uruguay I was marked as an addict. Mine was the first case of a player testing positive for cocaine in the country.”

Garcia made little impact with Paranaense norin a subsequent spell in Turkey with Kasimpasa, and when he returned to Nacional in 2013, still just 22, he was not the same barnstorming striker who had lit up Parque Central before. Redemption was at hand, though.

A move to Nacional's Montevideo rivals River Plate saw Morro return to his best form, and he continued to score and wow supporters upon arriving in Argentina with Godoy Cruz. Fans and opponents alike adored the Uruguayan for his bombastic talents on the pitch and relaxed, irreverent style off it.

In the 2017-18 Superliga he finished as top scorer with 17 goals as Godoy Cruz recorded their best-ever season in the Argentine top-flight, finishingjust two points behind champions Boca Juniors in second place.

On the penultimate weekend of the campaign, though, with Boca needing to drop points to keep the Mendoza club's hopes alive, he retained that characteristically detached calm.

“I won't watch Boca tomorrow,” he admitted to reporters after leading his side to victory over Argentinos Juniors. “I never do. I have a barbecue planned. It's Sunday, midday, after all.

“I'll hear about it when I get to the dressing room the next day because I don't watch television.” In a more recent interview, he confessed that he always saw himself as something of an outsider: “I'm like a green dog, strange as f*ck.”

Garcia scored 51 goals in 122 matches for Godoy Cruz, making him the highest scorer in the club's top-flight history.

He continued to fight even after the club's fortunes declined following the heights of that runners-up finish. However, following the inactivity caused by theCovid-19 pandemic, he managed just six appearances in last year's Copa Maradona, failing to find the net once.

The new year found Garcia out of the Godoy Cruz team altogether, training and living alone, having not seen his daughter, who lives in Uruguay, for almost a year and undergoing psychiatric treatment.

“We need positive leaders,” club president Jose Mansur had fired to reporters at the end of 2020 in reference to the troubled star, “you can't be a leader and not go to the gym, fail weight controls, fail all our metrics... let there be no doubt his time here is finished.”

At the time of his death, the player was isolated in his apartment after testing positive at the end of January for coronavirus. Those closest to him, however, were shocked at his passingwhen new hope appeared to be on the horizon, in the shape of a return to Nacional and a reunion with his loved ones in Uruguay.

“Santiago and I talked every week. The last time was Monday for my birthday, he told me he was organising everything to come back and when I called Thursday he did not pick up,” mother Claudia Correa told ESPN.

“The psychiatrist told me he had minor depression, he had plans, he wasn't thinking of death. The project he had was to keep training, he explained he was going to Uruguay, he was going to see his daughter. Then there was a problem with his departure.”

Correa went on to criticise Godoy Cruz chief Mansur for his comment referring to Garcia: "This Mr Mansur knew Santiago was desperate to leave. That made him feel very bad. He said he was a negative leader and should have been removed.

"But my son was always modest, good, he helped all those around him, he was a great team-mate and never disrespected anybody."

Compared to many nations in the west, Argentina has long held the reputation of being progressive when it comes to to mental health care. Buenos Aires famously has more psychologists per capita than any other city on earth, and it is common at social gatherings to hear accounts of therapy sessions in the same manner as one might describe a football match or day at work.

But inside football, the issue of mental health remains somewhat taboo. In the wake of Garcia's death, sports psychologist Marcelo Roffe, formerly part of Jose Pekerman's Colombia set-up, told TyC Sports that just six of Argentina's top-flight clubs employ professionals in the area: “In Argentine football we take good care of the body, but not the mind.

“We underestimate the mental factor and then in these moments we wonder why.A 30-year-old lad who was healthy and successful makes us see that depression is an illness that many people in the world suffer, it would be good for directors to take note of this.”

“We are not robots, we are not machines, we also go through stuff,” Garcia had signalled to Radio Nihuil in one of his final interviews. “Just like you guys are affected, so are we. That causes our performances on the pitch to be less than optimal.

“Sometimes there are things you cannot see, but when you feel them on the inside you realise.”

In 2015, world players' union FIFPro found that 38 per cent of active footballers surveyed had experienced at some point in their lives problems with anxiety or depression, a number which was predicted to skyrocket amid the game's shutdown due to the pandemic and ensuing job insecurity.

Depression is rarely talked about openly in the game, but it is far more common than most assume: ex-Argentina international Matias Almeyda and Barca legend Andres Iniesta both went public with their battles, while another survey carried out in Argentina in December revealed that 20% of elite sportspeople consulted hador continue to suffer with the illness.

While tragic events such as El Morro's death are thankfully rare at football's top level, it should prove a warning for clubs across the world to invest in psychological screening from professionals and ensure their employees are taken care of in every possible sense.

For now, though, all we can do is mourn the passing of one of Argentine football's top talents and most endearing personalities, and hope the lessons are learned in order to prevent such catastrophes from occurring again.