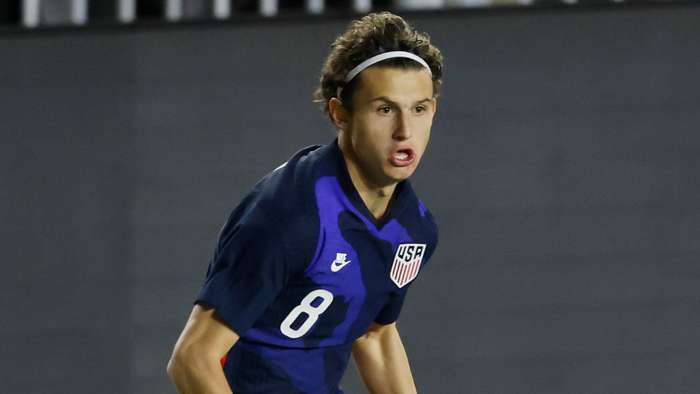 U.S. men's national team midfielder Brenden Aaronson scored his first goal for Red Bull Salzburg on Wednesday as he led the way in a 3-1 win over Austria Wien.

The 20-year-old midfielder was joined on the scoresheet by Sekou Koita and Luca Sucic to take down an Austria Wien side that featured American Erik Palmer-Brown in defense.

Aaronson joined RB Salzburg, managed by fellowcountryman Jesse Marsch, in January with the Austrian side paying a$6 million transfer fee (£4.6m) for the midfielder, plus up to $3 million (£2.3m)in performance bonuses.

"It was fantastic to be there for the team. Austria really tested us, and it was therefore a really important win. Our mentality was the key to our success today.

"The confidence we gained in recent weeks carried us through when we went behind."

"We reacted well after conceding. Until that point I was pleased with the performance, more or less.

"We then stepped up another gear and showed what makes us stand out.We showed mentality and fearlessness. I'm pleased for the two guys to get their first goals. I am sure that we will see a lot more from Brenden and Luka."

"Goals like this are why the USMNT should beexcited about everything Aaronson has to offer.

"The former Philadelphia Union midfielder already seems relatively comfortable with his new club, having nowstarted two of the five matches he's played for Salzburg so far.

"On Wednesday's goal, Aaronson showed the skill on the ball that has been there for quite some time, but what was more impressive was the poise and patience to pick his opportunity to find the far post.

"Those aspects of his game have come along relatively recently, with Aaronson truly breaking out in MLS last season after emerging as a legitimate threat in the final third.

"With the USMNT scheduled to face Northern Ireland in March, Aaronson looks a likely bet to be in what will almost certainly be a European-based squad.

"The midfield picture is very deep at the moment, with Weston McKennie, Tyler Adams and Yunus Musah involved, while Gio Reyna and Christian Pulisic could also see time as a No. 10 at some point.

"But Aaronson is seemingly in a very good place right now as the 20-year-old midfielder's next step is off to a hot start."