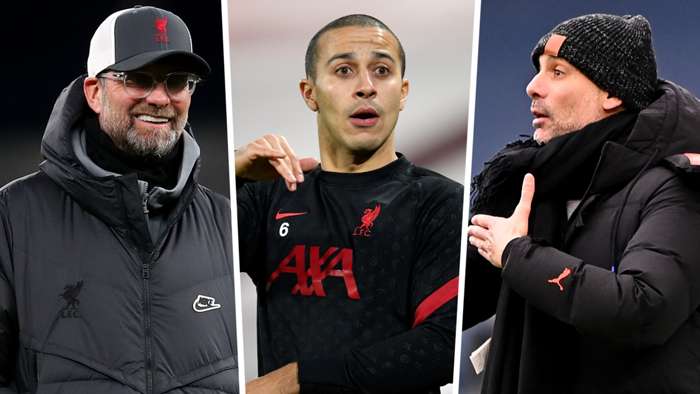 “Thiago oder nichts,” he told them.Thiago or nothing.

“He was the only player I wanted,” the Catalan would later say. “He has so much quality – above all his mentality. He always thinks everything is possible. He has no fear.”

Together, the pair won seven major trophies in three seasons at the Allianz Arenaand, on Sunday, they will be reunited as Thiago’s Liverpool look to blast their way back into the Premier League title race by beating Guardiola’s Manchester City at Anfield.

The Reds’ position is a precarious one. Defeat, or even a draw, would surely end their fading hopes of retaining the crown they won so spectacularly last season.

City sit seven points clear and have a game in hand on their rivals. They haven’t won at Anfield since 2003, but they will head into the game as favourites, having won their last 13 matches in all competitions.

And he certainly knows the way Thiago can get a team playing.

The Spain international is, belatedly, enjoying a run of games following his much-hyped switch from Bayern last summer. Fully recovered from the knee injury suffered at Everton in October, the 29-year-old has appeared in Liverpool’s last nine games, starting seven.

And while his impact has not yet been felt in terms of results – the Reds have won just four of the 11 games he has featured in so far – Klopp says he is delighted with what he is seeing from the seven-times Bundesliga winner.

“Good, really good,” he smiles when asked by Goal about Thiago’s form earlier this week. That was, admittedly, before the defeat to Brighton on Wednesday, but his impact had been seen in the eye-catching wins over Tottenham and West Ham prior to that.

The numbers suggest Thiago, despite his team’s struggles, is swiftly getting up to speed. Only Jordan Henderson, of Liverpool’s other midfield options, averages more passes per 90 minutes, and only Henderson wins possession more often.

Thiago attempts more duels than any other Reds midfielder, and makes more tackles and interceptions – and fouls - per 90 minutes too. He is, as Guardiola has always said, a complete midfield player.

Strange, then, that there has been so much debate around him of late. Didi Hamann, the former Reds star, is among those to have expressed doubt about whether Thiago will have the impact many expected on Merseyside.

“He’s a brilliant player, there’s no doubt about it, but whether he’s a player Liverpool needs, I’m not really sure.”

“Thiago slows the game down,” he suggested. “That is not Sadio Mane’s game, it is not Mo Salah’s game. We’re getting used to a new system but at the moment it’s not working.”

Both Hamann and Barnes have a history of going against the grain, in fairness, but it seems harsh in the extreme to point the finger at Thiago.

He has, after all, come into a side which has been decimated by injury. He has played just 56 minutes with Virgil van Dijk behind him, for example, and just 79 with Joe Gomez.

All but one of his 11 appearances have featured a midfielder – either Fabinho or Henderson, and sometimes both – at centre-back. And the one game which didn’t was his debut, at Chelsea back in September.

All this, of course, while adapting to a new team, a new league and a new life himself. Even world-class players need time sometimes.

There are plenty within the game who believe that buying players from Bayern, especially those who are in their late-20s or early-30s, is a risky business. Call it the Bastian Schweinsteiger Rule, if you like. Thiago’s injury record was cited as further evidence of a Liverpool error.

That, though, ignores the fact he featured in 40 or more games in four of his final five seasons in Munich, and that he was the best player on the pitch when Hansi Flick’s side won the Champions League last July. Even as Liverpool have stuttered in recent weeks, the former Barcelona man’s quality has stood out a mile.

“This fella just makes me want to watch football 24 hours a day,” said former Reds striker Michael Owen on BT Sport recently.“There’s nobody in thePremier League that plays like him.”

Klopp, meanwhile, has made a subtle alteration to his role in recent games, using him more as a number eightthan a number six, and on the right of a midfield diamond at West Ham with notable success.

“We thought ‘What did he do at Bayern, which role did he play there?’” he said. “Yes, he played as a number six but it was more a double-six, so we decided to adapt his position a little bit.

“It worked out pretty well. It gives us stability, it gives him stability, we can use his football skills, which are obviously outstanding. It’s been really good.”

Sunday, though, will be the acid test, a war of attrition against the league’s in-form side. A must-win clash against a manager that knows him as well as anyone.

There will, no doubt, be a hug between Thiago and Guardiola before kick-off, but after that it’s down to business.

If Liverpool are to keep their title hopes alive, they need their marquee signing at his very best.