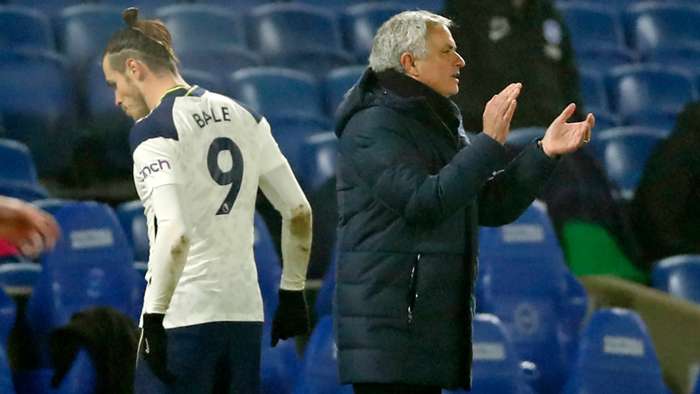 The most striking aspect of the 'All or Nothing: Tottenham' documentary on Prime Video was Daniel Levy’s reverence towards Jose Mourinho.

When the documentary first aired it looked like a disarmingly sweet, but irrelevant, detail that served to highlight just how far Levy had taken the club.

It was only a few years after he first became chairman that Mourinho arrived at Tottenham’s rivals Chelsea and took the Premier League by storm. Levy had every right to feel chuffed that he had convinced the Special One to work for him.

But as things begin to sour in north London, as a familiar sense of terminal decline begins to surface among the fan base of a Mourinho team, Levy’s apparent relationship with the Spurs manager starts to look like part of the problem.

After years of careful building under Mauricio Pochettino, Levy succumbed to romanticism, allowing himself to be lured in by the idea of Mourinho and a big-club mentality. And with the benefit of hindsight it is perhaps the same wide-eyed, toy-shop management that brought Gareth Bale back to the club.

Bale’s poor form, a consequence of dwindling talent that was understood at Real Madrid but overlooked with wilful ignorance by Premier League fans yearning for the good old days, follows the same trajectory as Mourinho: a name and an idea that is no longer operating anywhere near the peak of their powers.

Until 2019, Tottenham were a club who latched onto rising stars, who invested in potential. In Bale and Mourinho they have caught two superstars on their downswing. It is a lesson in patience and restraint; in resolving to hold firm with the project rather than seek short-cuts into the elite.

It is too early to condemn Mourinho’s Spurs, who are within touching distance of the top four and remain in three cups, but after Sunday’s woeful performance against Brighton there is a sense that the tide is turning against him.

And that isa bigger problem for Mourinho than it would be for most other managers, because both tactically and psychologically his powers rely on a collective belief in them; once the wizard’s curtain is pulled back the entire concept falls apart.

Mourinho’s Spurs have become a dull defensive team incapable of holding onto slender leads and over-reliant on Harry Kane and Son Heung-min to create counterattacking chances.

This helps explain why Spurs are playing without a clear game plan and why they keep retreating late in matches despite Mourinho’s insistence he is not instructing them to do so.

Rather than coach a detailed attacking structure, Mourinho expects his players to solve problems, which is not only out-dated in a modern age of tactical uber-geeks but makes Spurs prone to experiencing low self-esteem as total crisis.

There is nothing to fall back on - no automated coding to re-engage - when creativity drains away.

The inability to pick themselves up, or capitalise on a one-goal lead, gets to the heart of the psychological stranglehold of a Mourinho team. He is nottelling them to sit back, but when his tactics include passivity instead of pressing, cautious defensive blocks instead of riskier high lines, and hesitant late substitutions instead of bold changes, then the players subconsciously get the message.

Mourinho carries a weight with him, a rich psychological history; an aura of a master hypnotist who inspires extraordinary feats of collective self-belief and equally extraordinary collapses once the spell is broken.

The Tottenham players held the same narrative as the rest of us when he was first appointed, so it should come as no surprise that they invested in it, in the same way magicians use the audience’s belief – a placebo effect – to perform hypnotisms.

At the moment, and with little tactical detail to instruct them, this has seen the Spurs players exacerbate their defensive conservatism.

Since the 3-3 draw with West Ham in October, Tottenham have looked spooked, taking increasingly risk-averse decisions; slowly retreating until the opponent pounces on them.

Mourinho has only made this worse with his team selections, most recently picking three out-and-out centre-backs for the trip to Brighton, while fashioning a system that increases the reliance on Kane and Son.

The outcome of this is a sense of paralysis and fear. Spurs shimmy and jockey about the pitch looking completely passive as teams simply play straight through them.

It is a defensive frailty thatspeaks to Mourinho’s out-dated tactical model and the compounding effect of the players clumsily problem-solving by doubling down on the conservatism – assuming this is the manager’s preference and fearing his wrath.

Mourinho’s own bafflement (note the wild tactical swing at half-time against Brighton) is even more cause for alarm, particularly when his response tends towards self-preservation; towards throwing players under the bus. Presumably it creates a completely different atmosphere to the warmth and collectivism fostered by Pochettino.

The problem with dull, defensive football is that there is no good will in the bank when something goes wrong. And the problem with hiring a manager whose vision is built on the collective belief in his power is that the players have no real structure to fall back on when their self-belief takes a knock.

Put these two things together and you get a negative spiral that accelerates over time.

Back when Mourinho was an unstoppable champion – when presumably, like the rest of us, Levy first became enamoured – this came after a period of huge success. But we can say with increasing confidence that the modern Premier League has little use for his tactical philosophy, not in an age when the territorial dominance of the big clubs (a consequence of the increasing wealth divide) makes detailed possession and collective pressing a basic necessity.

One Premier League manager has already lost their job this season because of their inability to conform to contemporary tactical trends, and it may not be a coincidence that Frank Lampard’s most influential coach during his playing days was Mourinho.

But what is a coincidence is that like Lampard with Mason Mount,there is one player who has come to symbolise the perceived failures of the Mourinho regime.

There is still time forBale to come good and for Tottenham to turn their season around. But unfortunately, it increasingly looks like hewas an expensive mistake made by a chairman suckered in by romanticism.