Pogba limps off injured in Man Utd's clash with Everton 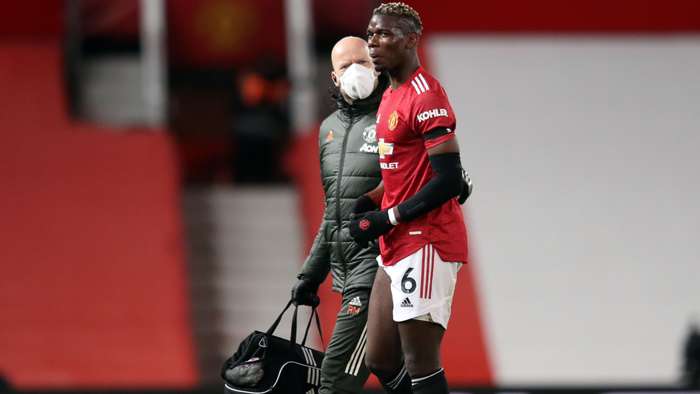 Manchester United have been dealt a blow as Paul Pogba limped off injured after 39 minutes of the Premier League clash with Everton.

Towards the end of the first half Pogba immediately pulled up in discomfort after playing asimple pass towards Victor Lindelof.

He pointed to his right thigh as he received treatment before being replaced by Fred and limping down the Old Trafford tunnel.

Midfield is one area of strength for Red Devils boss Ole Gunnar Solskjaer, with the likes of Fred, Scott McTominay, Bruno Fernandes, Nemamja Matic and Donny van de Beekensuring there are ample options to choose from.

However, in what is a congested season any absences will be keenly felt.

Following the clash with Everton, United face West Ham in the FA Cup on Tuesday before a trip to West Brom in the Premier League.

The action ramps up again the following week as the Europa League resumes with atrip to Real Sociedad.

Given the discomfort Pogba appeared to be in as he limped away from the action, it could be some weeks before he returns to the fold.

United were in command of the game when Pogba departed, having been given an early lead through Edinson Cavani, and the advantage was doubled via a screamer from Bruno to send United into the half-time break with a 2-0 lead.