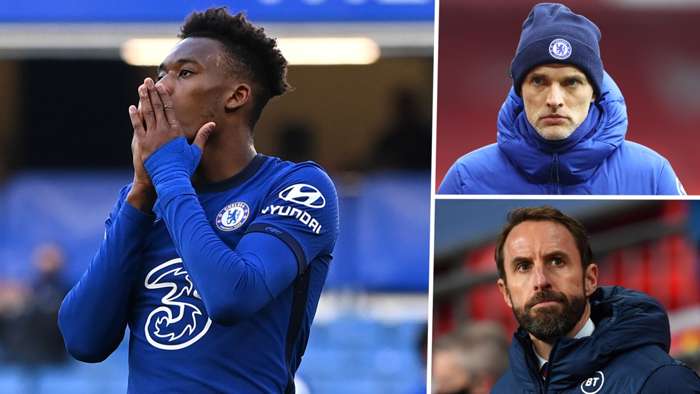 When Callum Hudson-Odoi was substituted after being on the field for just 31 minutes against Southampton nine days ago, he could have been forgiven for believing his Chelsea career wasabout to hit another roadblock.

"I was not happy with his attitude, energy and counter-pressing," Tuchel said post-match at the StMary's Stadium. “I took him off and we demand 100 per cent, I feel he is not in the right shape to help us."

Given how Hudson-Odoi felt he was being held back at times by both Maurizio Sarri and Frank Lampard, those were not the words that he would have wanted to hear as he aims to finally establish himself in the Chelsea first team.

But after bouncing back with eye-catching performances against both Atletico Madrid and Manchester United over the past week, the youngster is clearly keen to repay the faith his new coach is showing in him after regularly being left out of the biggest games by his two previous managers.

And he was similarly impressive in Sunday's draw with United, despite the post-match headlines focusing on his apparent handball that controversially did not lead to a penalty for the visitors.

Though he only played the first half at Stamford Bridge, he was Chelsea's main attacking outlet in the opening 45 minutes, and was the only playerto create more than one goalscoring opportunity for either side while he was on the pitch.

He was pictured withice strapped around his thigh following his withdrawal, though Tuchel confirmed the problem is only minor, and that he instead wanted to alter things tactically in a bid to keep United's attack at bay.

"The reason was tactical and a little injury combination, because we switched to a back five in defence and covered theposition of Marcus Rashford in between Azpi (Cesar Azpilicueta)and Reece James in the second half," Tuchel said.

"It was not an option to use Callum there,that’s why it was a tactical choice."

Tuchel's reluctance to rely on Hudson-Odoi when aiming to play more defensively speaks to the developments the wideman must make to his game as he continues to learn his new wing-back role.

Having previously played all his senior football as a wide forward, Hudson-Odoi's change of position seems to be getting the best out of him, and in turn could see him challenge for a place in theEngland squad for this summer'sEuropean Championship.

He has won three caps- the first of which saw him becomethe youngest player to ever make hisEngland debut in a competitive international as an 18-year-old back in 2019. ButHudson-Odoi hasbeen either injured or sent to representthe Under-21s over the past two years, with Gareth Southgate reluctant to select players who are not regular starters for their clubs.

That excuse will no longer wash when it comes to the U17 World Cup winner, however, and he is certainly producing the kind of performances that would not look out of place for a team hoping to reach the latter stages at this year's tournament.

Southgate has switched from a four-man defence to playing a 3-4-3 system over the course of the past six months, with his new formation largely mirroring the one that Tuchel has installed during his opening weeks in west London.

Hudson-Odoi impressing in such a system will surely have caught Southgate's eye, and though he is not short of options when it comes to right-sided defenders, the former Bayern Munich target'sattacking instincts certainly mark him out as a unique alternative.

His Chelsea team-mate, James, is just one those currently above him in the pecking order, but if Hudson-Odoi continues to keep him out of the Chelsea side then surely Southgate may have to re-think his own depth chart.

Elsewhere, Trent Alexander-Arnold has endured a significant slump at Liverpool while Atletico Madrid's Kieran Trippier threatens to be short of match practice having been hit with a 10-week ban for breaking betting rules.

Manchester City's Kyle Walker, Manchester United's Aaron Wan-Bissaka and ex-Chelsea youngster Tariq Lamptey of Brighton are also in the running, but none have made a convincing case for inclusion so far this season.

As such, there is a chancefor Hudson-Odoi if he can continue to be a shining light for Tuchel.