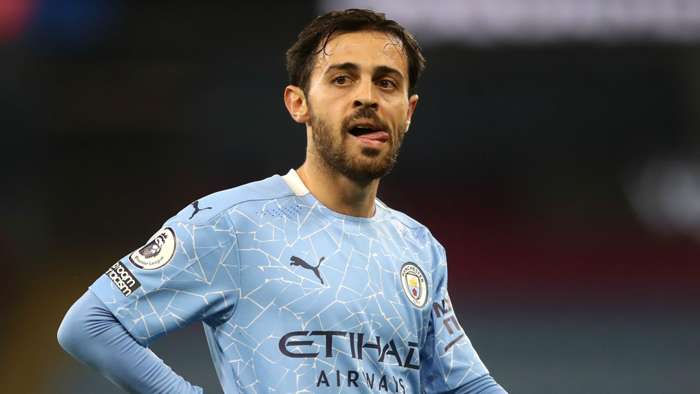 Pep Guardiola said Manchester City midfielder Bernardo Silva struggled after he was charged by the Football Association for a controversial tweet.

He posted a photo of Mendy as a child alongside an old image from Spanish company 'Conguitos' that has been condemned for racist undertones.

The French defender did not take offence, replying with laughing emojis, but the tweet was said to have constituted an “aggravated breach” of FA rules on social media behaviour.

Both Guardiola and Mendy defended the player in the aftermath, butthe City boss stillsaid the controversycontributed to a dip in form for Silva.

But the Portugal star has been close to his best this season and contributed another non-stop performance in the 1-0 victory over Sheffield United to help move City three points clear at the top of the Premier League.

“What a huge competitor again - he played an incredible game and he was absolutely brilliant,” Guardiola said. “His humility - in the bad moments he never loses the smile.

“It was a tough period for him, when he was being accused of something he’s not, and it was so hurtful for him.

“Still I cannot understand how the people of the FA, can accuse him to make a joke from a real friend with Mendy and he struggled sentimentally because he is a humble guy.

“I am delighted he’s back and he is playing the level that we know. He can do everything. He is another top fantastic player who always does the service of the team.”

Meanwhile, the victory over the Blades was City’s ninth in January, which set a new record for most wins by a team in the top four tiers of English football in a single month.

Guardiola said it was a particularlybig achievement during the coronavirus pandemic whenthere are no fans in the stadium and the fixture schedule has been compacted.

“To achieve this is quite remarkable, more than any other period from our lives so that is why I didn’t expect it,” he said.

“I said to the players in the meeting, we’ve finished the first leg, congratulations, it’s remarkable what you’ve done all of you and now keep going. Now go home and rest and Burnley.”