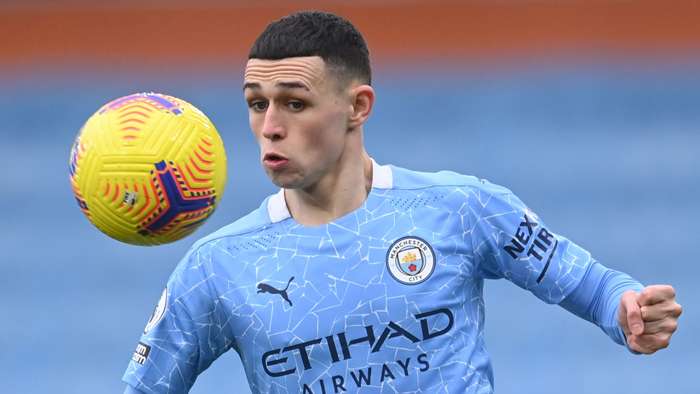 Phil Foden admitted his goal for Manchester City in their 4-1 thrashing of Liverpool was "perfect", and said the Citizens had been rewarded for showing "courage from minute one".

Manchester City moved 10 points ahead of Liverpool in the Premier League table with the win and now hold a five-point advantage over Manchester United at the top with a game in hand.

Foden has now scored 10 goals across all competitions this season. Among those in double figures across Europe's top five leagues, only Erling Haaland is younger.

He's alsothe youngest player to ever score and assist in a Premier League game against Liverpool at Anfield.

None of those accomplishments are lost on Foden, who is playing on par with team-mates who cost tens of millions for the club to acquire.

"I struck my goal perfect and I'm just happy to see it go in and help the team," Foden said. "It gives us every chance to go on and win the title, but the job isn't done and we've got a long way to go. When you beat the champions, everyone's confidence goes sky high, so it can only help us."

Manchester City midfielder IkayGundogan has seen plenty of immense young talents during his decorated career, and he thinks Foden stands out as one of the best.

"Phil deserves all the credit, he's doing really well," Gundogantold BBC Radio 5 Live. "Compared to last season he has stepped his game up this season. He's still so young we can't forget that, a lot to come from him. Very happy to have him in our team he gives us an incredible quality and great to see a young kid playing so well."

Guardiola, meanwhile, has tried to keep Foden hungry to kick on further while still talking up the youngster.

"He keeps the ball really well, he arrives so aggressive but he is also still so young," Guardiola told Sky Sports. "When he plays wide it is more easy for him, he will learn. The action for the second goal and the fourth goal, we know what a huge talent he is but he is still young and hopefully he can understand he can still improve.

Foden was just a part of a strong performance across the board from Manchester City, andrecognised the value of his colleagues while speaking after the game.

"It's brilliant, every player wants to play in big games like this and we showed that courage from minute one," Foden said. "They made it so difficult for us but we showed our courage to play our football and keep going, and in the end it paid off.

"I feel like sometimes we're a slow team to get going. It was definitely better in the second half, it's something to work on. We definitely forced the errors, it's something we're working at in training. Everyone worked for each other and got their rewards today."