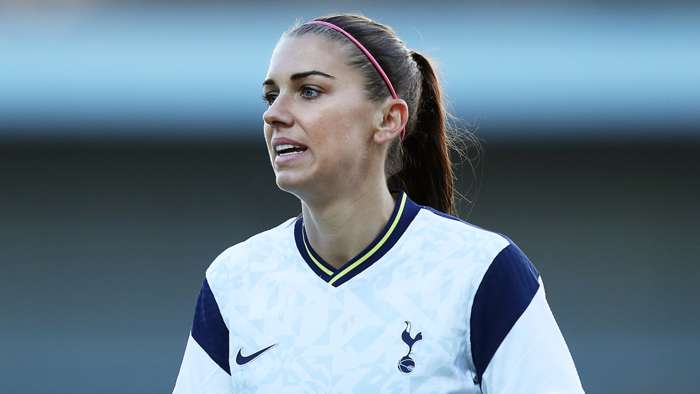 Alex Morgan admits her decision to leave Tottenham last month was harder than she expected, but said ultimately she returned to the U.S. for the benefit of her family and her NWSL side Orlando Pride.

Though she didn’t manage as much playing time as she'd hoped, Morgan said she enjoyed her time with Tottenham more than she anticipated and her decision to return to Orlando was not an easy one.

The 31-year-old gave birth to her daughter Charlie in May 2020 and after returning to playing condition, she signed with Spurs in September on a deal through the end of 2020.

Morgan did not make her Tottenham debut until November after she overcame a knee injury, and she immediately started to have an impact on the pitch for Spurs.

Spurs, who had been struggling in the Women’s Super League, won two and drew two of Morgan’s four league matches, with the USWNT star scoring two goals.

Though there was some speculation that Morgan could extend her stay in north London, the two-time World Cup winner announcedlast month that she would return to the United States.

“When I did sign, I thought that it was going to be a short-term deal,” Morgan told reporters on Thursday. “That was my mindset going into it because I thought that the NWSL would start back up. I wanted to also be available for all of the training days with the national team.

“I knew it was also going to be a strain on our family. Being across the world, not having Charlie be able to see a lot of her cousins or grandparents.And for Servando Carrasco, her husband to ask him to move there or not be with us if he was going to continue to pursue playing soccer as well I think would have been really difficult.

"As I went through the season with Tottenham, I really enjoyed my time and I really loved it more than I expected. I got to know the girls a lot more than I thought. And the decision ended up being a lot harder than I expected. And I really weighed both sides for quite a few weeks, I had some conversations with Rehanne Skinner, Tottenham head coach. Also with some other people within the club, and a lot of my team-mates.

“I think ultimately it just came down to coming back to the U.S. because that way I would keep our family as close together as possible.

"Given the circumstances, just with the pandemic continuing to really extend into 2021 I felt like it was just best for me to be in the U.S. and be available for the national team and start off a full season with Orlando Pride rather than going to Tottenham late, then finishing the season with Tottenham, then going to Orlando Pride late.

The striker has returned to the Orlando Pride for the club’s preseason ahead of the kickoff of the 2021 NWSL season in April with the Challenge Cup.

Morgan is currently in camp with the USWNT for the SheBelieves Cup, which will begin next week.

The USWNT will face Canada on February 18, Brazil on February 21 and Argentina on February 24 in the four-team tournament, which will take place in Orlando. Argentina were a late addition after Japan pulled out due to coronavirus concerns.