First female head coach? NBA or NFL will get there long before the Premier League 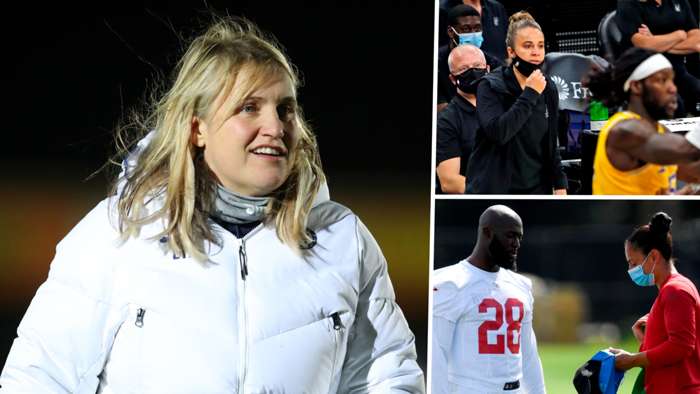 When reports emerged linking Chelsea’s three-time Women’s Super League winning manager, Emma Hayes, to the vacant position at League One club AFC Wimbledon this week, some said it was a sign of progress.

Realistically, though, it was simply a reminder of how far behind football is, with so few women in significant coaching roles in the sport, particularly when compared to others.

At the very end of 2020, Becky Hammon, the assistant coach for the San Antonio Spurs, made history when she became the first woman to serve as the head coach during an NBA game.

Following Gregg Popovich's ejection from their game with the Los Angeles Lakers, Hammon took over the task of trying to beat LeBron James and company.

That milestone, while huge, was notcompletely new territory, though. It came almost 20 years since the first female assistant coach entered the NBA, when Lisa Boyer was appointed bythe Cleveland Cavaliers in 2001.

Two decades later, Hammon herself is among nine female assistants in the league.

The idea of the NBA having a first female head coach is certainly much more realistic than any of the 92 clubs in the Premier League or EFL.

American football is another good example. When the NFL play-offs began in January, six of the eight female coaches within the league were involved in the post-season.

Tom Brady’s Tampa Bay Buccaneers, who will play in the Super Bowl on Sunday, have two female coaches.

Examples like this can be picked from so many sports. In tennis, Andy Murray, now a three-time Grand Slam winner, hired Amelie Mauresmo as his coach back in 2014.

While that was notthe first or last instance of a female coach in men’s tennis, Murray constantly challenged those who questioned why he would hire a woman and increased conversation around the matter.

"The amount of criticism she got in comparison to any other coach I've ever worked with -it's not comparable at all," the Britsaid a few years later.

"Now, when I lose a match, I get the blame. When I was working with her, it was always her fault."

There are few, if any, sports where women coaching men is the norm, but football is certainly nowhere near the frontline of the battle against such institutionalised sexism.

Head coaches, assistant coaches, members of the backroom staff, even youth and academy coaches in men's football are very rarely female. In March 2019, there were only two female coaches in Premier League academies, never mind among the senior teams.

It isimpossible, then, to expect the English game'sfirst female head coach to be around the corner.

It isnot just about female coaches, either. When Hayes was asked about the rumours linking her to AFC Wimbledon this week, she used it as an excellent opportunity to not only highlight the lack of female coaches in men’s football, but the lack of Black, Asian and minority ethnic (BAME) coaches too.

There is just one non-white coach in the Premier League, Wolves’ Nuno Espirito Santo. In the EFL, which has 72 clubs, there are only a further four.

Despite it being over 60 years since Tony Collins became the first black manager in England’s Football League, there is still a huge diversity issue.

There is plenty of work going on within the Football Association to bring about positive change, but the problems BAME and female coaches face cannot and will not be solved overnight.

Collins’ case shows that, even ifHayes did complete a sensational switch to a relegation-threatened Wimbledon side, that would not suddenly changethe game.

With her Chelsea team constantly creating history as they target Champions League success having reachedanother Continental Cup final on Wednesday,there is little reason for her to want to move into a game that has hardly proven itself the most welcoming to those that do notfit the profile of white, heterosexual and male.

"Football is for everyone," Hayes said after Wednesday's win over West Ham.