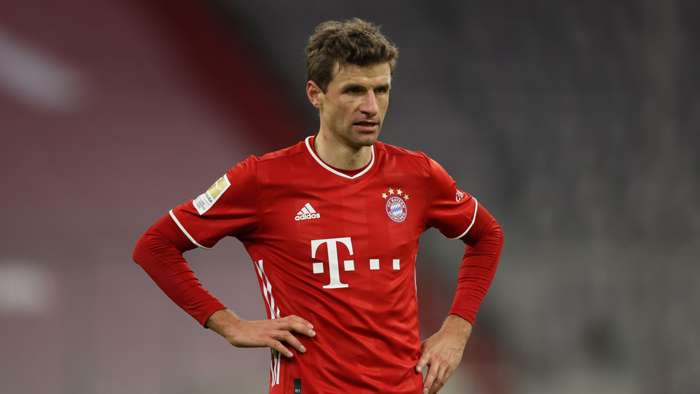 Muller will miss Bayern's clash with Mexican outfit Tigres on Thursday after being diagnosed with coronavirus, with the 31-year-old star now set to undergo a 10-day period in quarantine.

Eric Maxim Choupo-Moting could now take Muller's place in Hansi Flick's starting XI at theEducation City Stadium in Al Rayyan, having been brought on for him in the second half of the 2-0 semi-final win over El Ahly.

Bayern have released an official statement confirming Muller's positive test, which reads: "Thomas Müller, 31, has tested positive for coronavirus at the FIFA Club World Cup in Doha and was promptly isolated.

"Following his return to Munich, he will immediately go into quarantine. FC Bayern has agreed this with the relevant authorities.

"The whole FC Bayern team was tested again on Thursday. There were no further positive cases."

Muller will also be unavailable for selection for Bayern's next two Bundesliga fixtures against Arminia and Eintracht Frankfurt.

The German champions will welcome Arminia to Allianz Arena on Monday, before taking in a trip toDeutsche Bank Park to face Frankfurt five days later.

Flick will then start preparing his side for the first leg of their Champions League round of 16 tie against Lazio on February 23. Muller will have to post a negative coronavirus testat least 48 hours before that encounterin order to take part.

Muller will be a big loss for Bayern as they enter a crucial run of games, with the ex-Germany international having played a key role in Flick's set-up in the first half of the season.

He has contributed 13 goals and 14 assists to the team's cause from 31 outings across all competitions to date, linking up to great effect with Robert Lewandowski in the final third of the pitch.

Bayern supporters will hope he can return in time for the Champions League clash with Lazio, during which the current holders will be defending their 16-game unbeaten run in the competition.