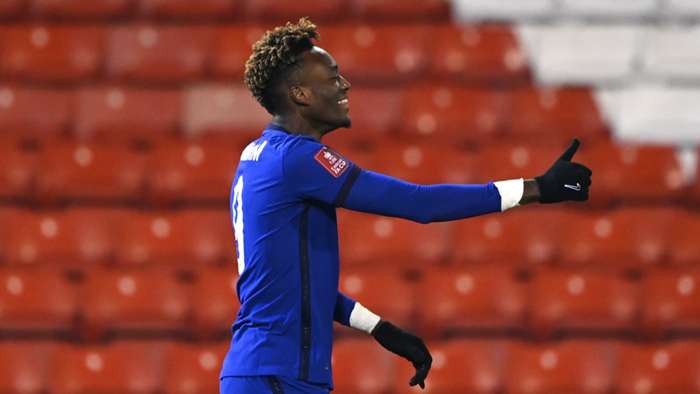 Until Tammy Abraham's 64th-minute goal, Chelsea were second best against mid-table Championship side Barnsley in the fifth round of the FA Cup.

But, in the end, the Blues' academy stars saved the day in a 1-0 victory.

Billy Gilmour picked up the ball in the half-space and released Reece James down the right. The full-back's explosive run put him in position to provide Abraham with a tap-in.

Before that moment, aside from a penalty shout that was waved away, Chelsea were dominated by Valerien Ismael's upstarts.

Tuchel faced the same problems that departed manager Frank Lampard had faced, with his side appearingweak at the back. The new boss made10 changes from his 2-1 away win at Sheffield United in the Premier Leagueat the weekend, and the lack of continuity showed.

Right now, thebiggest concern is that the big-money signings who had failed to impress late in Lampard's reign continue to struggle.

Most notably, Christian Pulisic and Hakim Ziyech underwhelmed in South Yorkshire. Final balls were misplaced when the duo had the opportunities toget into a game that otherwise passed them by.

Much of the focus in Lampard's final days was on his inability to get the best out of his £120 million ($166m) German talents Kai Havertz and Timo Werner.

However, Pulisic has not reached his potential this season either having suffered several muscular injuries throughout the campaign.

He got five goals and four assists in 11 games at the tail end of last season,which helped haul Chelsea to the FA Cup final and a place in the Premier League's top four. But hisFA Cup final appearance was arguably his last good display and he has yet to reach those levels since.

Ziyech, meanwhile, was rushed back from injury to face Manchester City to try to relieve some pressure on Lampard butput in a woeful display in that 3-1 home defeat.

He wasn't able to solve his old manager'sproblems as Lampard edged closer to the sack and his form hasn't recovered since.

However, unlike many other high-profile signings this season, he has a back catalogue of all-star performances in Chelsea colours already.

Ultimately, he was removed for another academy star in Tino Anjorin who outperformed the Moroccan late on.

As it was, with several big names underwhelming, the academy contingent stepped up once again. Mason Mount was the odd one out - rested here - but Abraham's hard-working display shone above all.

Having only played 51 minutes of Tuchel's first four games, Abraham did as much in his own box defending set-pieces as he did in front of the Barnsley goal.

He cleared the ball off the line late on to save Chelsea's from extra-time and deny the home side what would have been a deserved chance to win the match.

"This was a very nice goal where he was at the end of a very good combination," Tuchel said."Abrahamscores decisive goals in cup games and this was a very decisive goal and the stop on the line was crucial for us. It is good for him, for strikers it is most important to score."

The one big-name signing who did perform was Kepa Arrizabalaga who earned a clean sheet under serious scrutiny. He produced saves and dealt with a host of dangerous set-pieces.Tuchel has left the door open to the £71m ($98m) goalkeeper to rebuild a career that many believed was in tatters after his severe struggles last season.