Barcelona have asked about Loren but he's not leaving, say Betis 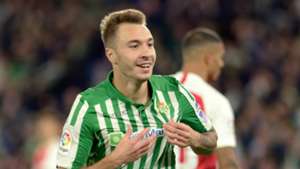 Barcelona had an approach for Loren Moron rejected as they continue to explore options to ease their injury woes, according to Real Betis coach Rubi.

Barca were dealt a severe blow this week when they confirmed Ousmane Dembele is expected to be out for six months after hamstring surgery.

With Luis Suarez also sidelined for several months, Barca are reported to have been granted special dispensation to sign a replacement, providing the player in question is either a free agent or already based in Spain.

The Catalan side turned their attention to Loren after ending their interest in Valencia star Rodrigo due to the EUR60m (?51m/$66m) asking price, while Los Che refused to let him go on loan for the rest of the season.

Betis are said to be demanding EUR30m for Loren, who has scored 10 goals in 25 appearances in La Liga and the Copa del Rey this season.

And Rubi admitted Barca did make an approach for Loren but were unsuccessful, with Betis not willing to let the player go.

"Loren is going to end the season with Betis," Rubi said of the striker at a press conference.

"They have asked, but the operation is 99 per cent not done. We don't want him to leave and they have looked at many [players].

"Loren trains just as well as always. This is something that happens in football.

"We couldn't sign another player unless his release clause is paid. Loren's EUR50 million, so 99 per cent it is not done.

"The information I have is that he is [staying] here and that is what we all want."

Loren, 26, joined Betis in 2015 and was given his league debut for the club by current Barca coach Quique Setien in February 2018. He has since made 85 appearances for Betis, scoring 25 times, and his contract runs until the summer of 2022.