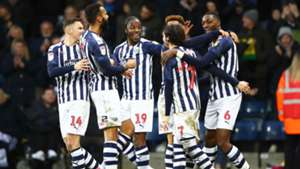 West Brom will be aiming to strengthen their grip on top spot when they welcome Nottingham Forest to the Hawthorns in Saturday's Championship clash.

The Baggies are six points clear in first place after a run of three consecutive wins, beating Reading 2-1 in their most recent league outing.

Having run out 2-1 winners in August's reverse encounter at the City Ground, they are 3/4 (1.75) favourites with bet365 to put more distance between themselves and their promotion rivals by coming out on top here.

Sabri Lamouchi's men fell to a disappointing 1-0 home defeat against Charlton on Tuesday, but can be backed at 7/2 (4.50) to bounce back with a big win against the leaders.

Two of the last three meetings between these sides have resulted in draws, and there are odds of 11/4 (3.75) available on this one also finishing up all square.

Kieran Gibbs and Grady Diangana are both ruled out with respective hamstring and back injuries.

Long-term absentee Tendayi Darikwa is the only casualty for the guests, as he continues his recovery from a serious knee injury.

Despite sitting fairly comfortably at the top of the league, Slaven Bilic's men have actually won just one of their last five matches in their own back yard.

What's more, the clean sheet they kept in the 2-0 victory over Luton last time out was their first in 16 home fixtures in all competitions this campaign - although they have also found the net in all but two of those games.

Having collected as many points on the road as they have on home turf so far, Forest will certainly back themselves to get on target for their 15th away match in 17 in the league.

All in all, odds of 4/5 (1.80) look like solid value on goals going in at both ends for West Brom's 14th home match in 17 this campaign, as well as the fifth encounter in a row with this opposition.