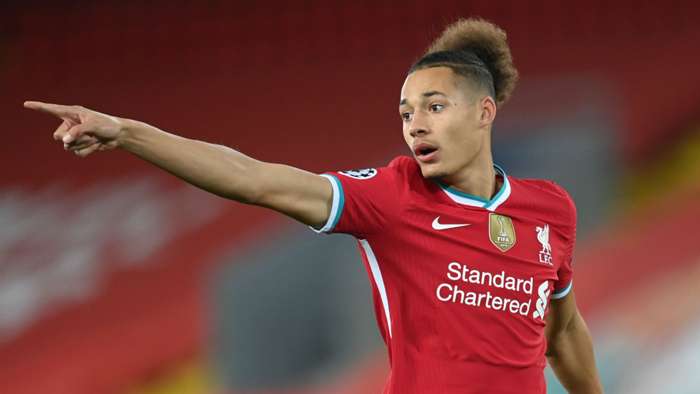 Rhys Williams has joined Liverpool's list of defensive injury concerns after being sent home from the England Under-21 squad.

The 19-year-old has featured in three Champions League games and two Carabao Cup fixtures for the Reds this season, and has been likened to Virgil van Dijk due to his similar appearance and style of play.

With both Van Dijk and Joe Gomez sidelined until the new year with serious injuries, Williams looked set to play an even more prominent role at Anfield in the coming weeks, but his progress has been halted while away on international duty.

The defenderreturned to Merseyside as a precaution after being left out of England U21 boss Aidy Boothroyd's squad to face Albania on Tuesday due to a hip problem.

"He had a very minor stiff hip," Boothroyd told reporters of William's condition. "It was in his best interests to get him back to Liverpool.

"With all the players, if there's any potential injuries or niggles then our medical staff is in contact with the club.

"Rhys wasn't actually on the bench so I thought the best thing was to get him back to Liverpool."

Klopp is facing an injury crisis at the back heading into a top of the table clash against Leicester City at Anfield on Sunday.

Fabinho and Andrew Roberston are also doubts for the meeting with the Foxes along with Williams, while Trent Alexander-Arnold is expected to be out of action until December as he continues his recoveryfrom a calf issue.

Liverpool will also be without talismanic forward Mohamed Salah in their next top-flight outing, with the Egyptian currently taking in a spell in self-isolation following a positive coronavirus test.