Who was the first black footballer to play for England? 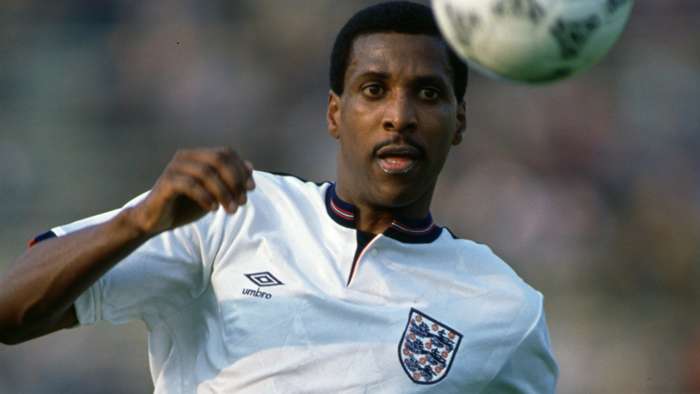 The first black man to play a full international match for England was Viv Anderson in 1978.

Anderson was an important part of the Forest side which won promotion to the First Division in 1977, lifting the title and the League Cup a year later. He was called up to the England side by then-manager Ron Greenwood soon after, making his debut in a 1-0 friendly win over Czechoslovakia at Wembley.

English football in the 1970s could be a hugely hostile place for a black man, and Anderson was regularly subjected to racist abuse from fans.

Anderson told ITV: "I remember going to Carlisle; something happened and I'm sat down within five minutes. Clough said, ‘I thought I told you to warm up.’ I said, ‘Well they’re throwing apples and pears and bananas at me.’ He said, ‘Go back out there and get me two pears and a banana.’

"Then in the dressing room he pulls me and says, ‘I did that for a reason, you know - because if you let them dictate to you, you aren’t going to make a good career and I think you can play. Don't let them influence you in any way.’"

His competitive debut for England came in a 2-0 win over Bulgaria in qualifying for the 1980 European Championships.

He eventually won 30 senior caps for Englandin an international career spanning 10 years. Short spells at Sheffield Wednesday, Barnsley and Middlesbrough followed, before his retirement in 1995.

Across six clubs, Anderson won all there was to win in English football, with medals for the First Division, FA Cup, League Cup and Charity Shield, as well as two European Cups and the European Super Cup.

While Anderson was the first black man to win a senior international cap for England, he was not the only such pioneer.

In 1977, West Brom winger Laurie Cunningham became the first black man to represent an official England team when he won his first cap at Under-21 level.

Cunningham later became the first English player to play for Real Madrid, enjoying a much-travelled career as he represented the likes of Manchester United, Marseille, Charleroi and Wimbledon.

He made his senior international debut against Wales in 1979, eventually playing six times for England.

Cunningham was tragically killed in a car crash at the age of just 33while playing for Madrid side Rayo Vallecano.

A report from BBC London revealed that in 1971, Benjamin Odeje became the first black male to represent England when he played for England Schoolboys against Northern Ireland in front of 70,000 fans.

Decades before Anderson made his senior debut, Plymouth striker Jack Leslie was called up to play the Republic of Ireland in 1925. However, he was dropped from the squad before making his debut.

Leslie’s family believed he was dropped after a scout was sent to watch him play and realised the colour of his skin, having been called up on the strength of his goalscoring statistics in the days before video footage was available.

The first black woman to play for England is thought to have been Liverpool-born Emma Clarke in 1881. Clarke played in a match against Scotland in Edinburgh which is widely considered to be the first organised game of women’s football.