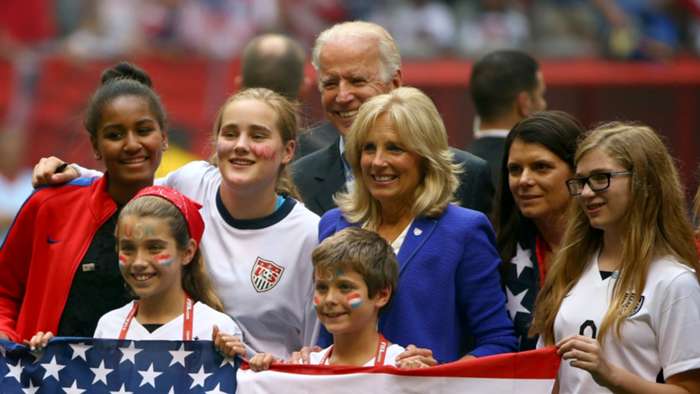 The majority of the United States - and the rest of the world - collectively breathed a sigh of relief when former vice president Joe Biden won the 2020 presidential election, defeating Donald Trump and ending four years of a tumultuous term.

So is the Democrata soccer fan, and if so, whatsoccer team does Biden support? Goal takes a look.

While Biden has never pledged his affiliation to any club soccer team in the United States in Europe, he is obviously an ardent supporter of the U.S. national teams.

He has, however, been photographed at a game betweenD.C. United andPhiladelphia Union in 2010.

Biden been supportive of both the U.S. Men's National Team and the U.S. Women's Team especially, voicing his support for the women's team to be grantedequal pay.

The former vice-president, along with his wife Jill Biden, has been pictures at several soccer games, and supported the United States' bid to host the 2022 World Cup before it was eventually awarded to Qatar.

Biden congratulated the USWNT immediately after their World Cup success in 2019 in France, writing on his Twitter:"USWNT, congratulations on the big win and thank you for the jersey!

"Your talent, heart and advocacy for equal pay represents the best of America and serves as an inspiration for all."

He has consistently called for the USWNT to be paid the same as their male counterparts, and even threatened to withdraw funding for the 2026 World Cup as president should the gender pay gap issue not be resolved.

"To USWNT: don't give up this fight," he said on Twitter. "This is not over yet.

"To U.S. Soccer: equal pay, now. Or else when I'm president, you can go elsewhere for World Cup funding."

A number of current and former USWNT athletes have also publicly endorsed Biden for president, with Megan Rapinoe and Alex Morgan all supportive of him.

"Congratulations Joe Biden," Rapinoe wrote on Twitter. "#46 and has to be said, historic day for @KamalaHarris and for Women, for Black Women, for South Asian Women. LFG!"

Rapinoe has often spoken out against Trump, calling the outgoing president a "white nationalist" and refusing an invitation to the White House should the USWNT win the World Cup - which led to a social media sparring war from Trump.

The USWNT star also jokingly hinted that Biden should nominate her for vice-president prior to him choosing Kamala Harris in an Instagram live video:"I don't want to put you on the spot – I think I could still play soccer and do this," Rapinoe told Biden.

"But if you need a vice-president, I'm just saying I'm available for an interview. We can talk logistics and the details. Put it on your list. No pressure."

While Biden does not seem to follow club soccer closely, he is an all-around sports fan - a supporter of the Philadelphia Phillies in baseball and Philadelphia Eagles in NFL.