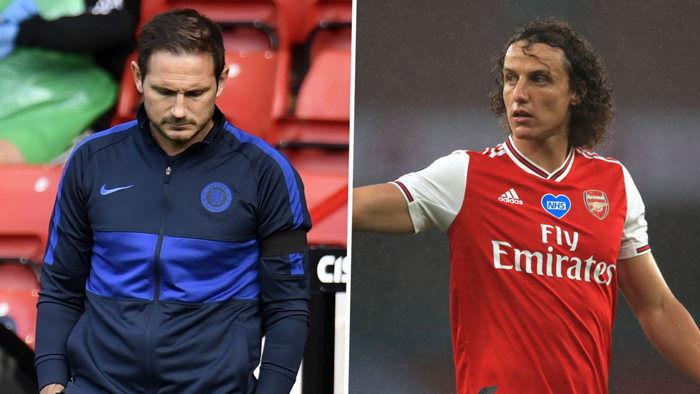 Chelsea boss Frank Lampard knows the quality of David Luiz and will not be targeting the centre-back as an Arsenal weakness inSaturday's FA Cup final.

The experienced defender returned to play a crucial role as Arsenalenjoyed a more consistent run of form, earning a one-year contract extension and shining against City in the FA Cup semi-final triumph.

David Luiz had two spells at Stamford Bridge, in the first ofwhich he played alongside Lampard, who said he was instrumental in the Blues' Champions League and FA Cup double in the 2011-12 campaign.

"I certainly haven't targeted him as a weak point," Lampard told an online media conference."What I have for David is a real respect, he was a top player in our 2012 campaign, David was a top player within that.

"We're preparing for Arsenal with him in a team, I know how good he can be and I know what a big player he can be for Arsenal."

Lampard finishes by saying he has great respect for David Luiz, and recalls the amazing feeling of winning the Champions League with him in 2012.

That's all from the boss for now. More online and on the app shortly. Thanks for following.

Lampard lifted the FA Cup four times as a player and can claimsilverware in his first campaign as Chelsea boss and just his second in management.

"Obviously I would be delighted to and if you get to a final you want to win it," he said when asked what it would mean to win the trophy as a manager."It will be difficult, there is many a great manager who hasn't won things, but now we are here I want to win it."

The showpiece at Wembley will be played without supporters allowed to attend due to the coronavirus pandemic. Lampard concedes it will be odd to play a final in such circumstances, while adding he is determinedfor his pre-match message not to put too much pressure on his team.

"It will be strange to have no fans. We are getting used to it. We want fans back, but we have to respect the current circumstances," he added."The fact we are used to it means you can focus on what's in front. If you do win then the FA Cup title stays with you forever.