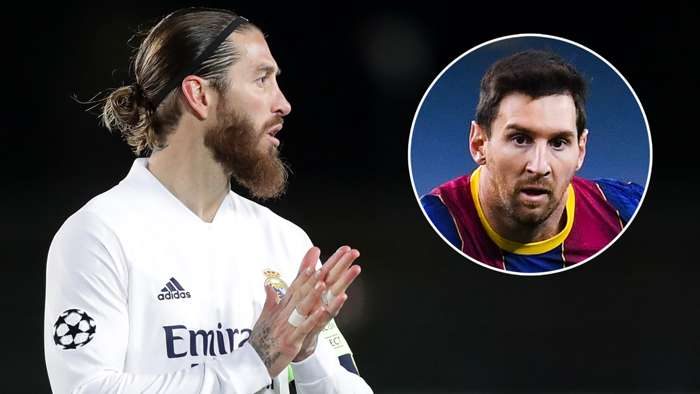 Sergio Ramos admits that Lionel Messi has made Real Madrid suffer down the years, with the Blancos captain of the opinion that he would have “more titles” to his name had an iconic Argentine not been at Barcelona.

A long-serving performer at Santiago Bernabeu has not done badly on the trophy front down the years, with domestic and continental success at club level complemented by World Cup and European Championship glory on an international stage with Spain.

Ramos has four Champions League crowns to his name and five La Liga successes , but Messi has helped Barca to 10 title triumphs and made a habit of dashing the dreams of Clasico rivals down the years.

“Perhaps ifBarcelonadidnt have him, we would have won more titles.

“There was a time when we faced the bestBarcelonain history. We had a great coach like[Jose] Mourinho, but it was hard for us to beat them.

“We didnt win much and there was a lot of tension, caused by either them or by us.”

The UEFA Super Cup has been claimed on three occasions, while the FIFA Club World Cup has been hoisted aloft four times.

While taking in a record-setting 180 appearances for Spain, Ramos has sandwiched a World Cup success in 2010 between two European Championship triumphs.

In total, he has won 22 trophies at club level and a further three with his country.

Real are determined to defend their La Liga title in 2020-21, while a 3-1 lead has been established in the first leg of a Champions League quarter-final clash with Liverpool.

Ramos will be hoping to play a significant role in pushes for silverware down both of those paths, but he is back on the sidelines at present with another muscle injury.

Questions are also being asked of how long he will be sticking around in the Spanish capital.

The 35-year-old will see hiscontract expire in the summer and no extension has been agreed as yet as he continues to edge towards free agency.

Manchester United and Paris Saint-Germain are among those to have seen moves for Ramos mooted as uncertainty reigns over his future at the Bernabeu.