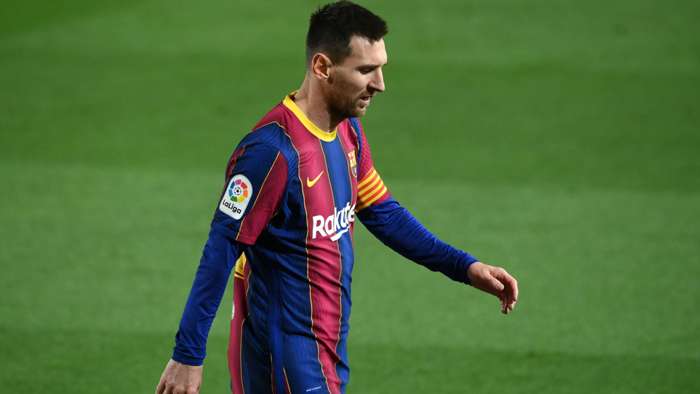 Paris Saint-Germain coach Mauricio Pochettino attempted to calm the storm between his club and Barcelona over the future of Lionel Messi.

PSG director Leonardo and Messi's Argentina team-mate Angel Di Maria have both spoken out about the possibility, to the chagrin of the Catalans.

Messi himself has stayed silent on whether he will stay or go, having asked to leave over the summer of 2020 before ultimately backing down.

But Pochettino insists that it is not PSG's intention to insult their last-16 opponents just weeks before the clash begins.

"Messi? We respect our rivals and other clubs," the former Tottenham boss told reporters on Saturday when asked about the conflict.

"We respect Barca. And right now we are focused on Ligue 1.

"The game against Barca is not for 10 days. Before that we have the derby with Marseille and then there is the Coupe de France."

Barcelona presidential candidate Joan Laporta and coach Ronald Koeman have been among the most vocal critics of how PSG have conducted themselves in their courting of Messi, who has spent his entire professional career at Camp Nou since joining as a teenager from hometown club Newell's Old Boys.

"For me, it's a lack of respect," Koeman told reporters in reference toDi Maria, who said there was a "good chance" of Messi moving to France.

"It's not respectful to speak so much about a player that is still a Barça player.

"It's not good. It's a mistake to say something like that, it could add further spice to the Champions League game. It's not fair. It's not respectful towards Barça to talk about one of our players like that."

For his part, Laporta fired toL'Equipe: "PSG have a lot to learn.

"We didn't like PSG's behaviour at all. They have disrespected Barca."