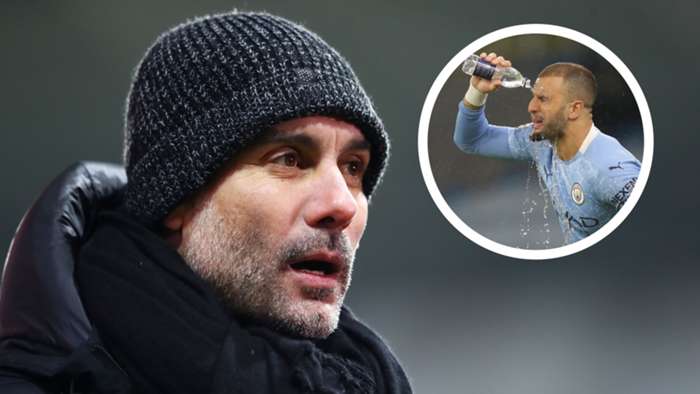 Kyle Walker admits he “would hate” to be in Pep Guardiola’s position at Manchester City, with the Blues boss facing a sizeable selection headacheeach and every time he pieces together a starting XI.

Guardiola is the man charged with the task of trying to keep everyone happy, while also ensuring that his team remain competitive on multiple fronts, and Walker considers that to be a thankless task.

“Whoever is named on the team sheet needs to put in a good performance and put pressure on those who are starting now and hopefully give the manager something to think about,” Walker told reporters.

“I would hate to be this manager because of the headache we must cause him. Every 11 that he puts out seems to put a good performance in.

“But it is a good problem to have and shows the level of where this football club is moving. We want to achieve great things here and hopefully we can do.”

He added: “Each and every game, we approach it like it is our last. We change nothing and we do nothing different.

“The manager prepares just the same, whether it is Swansea or Liverpool, everything is done in detail to give us as much information as he can before we go out on the field.

“We will just keep on taking every game as it comes and hopefully we will have a few trophies at the end of the season. We will just keep our feet on the floor and keep doing the hard work on the training field.”

Despite having an abundance of talent at his disposal, Guardiola has used only 23 players in the Premier League this season.

That places City towards the bottom of a top-flight chart, with only three clubs – Crystal Palace, Aston Villa and Leeds United – selecting fewer players in 2020-21.

At the opposite end of the scale, West Brom’s tinkering has seen 30 senior stars called upon, while Arsenal and Southampton have used 28 apiece.

Liverpool – who have endured injury struggles throughout the campaign – and Chelsea complete the top five on 27.

The Blues remain in the hunt for four pieces of silverware this season and could rewrite the history books once again.

Guardiola’s men are already into a fourth consecutive Carabao Cup final, while also progressing to the quarter-finals of the FA Cup – where they will face Everton.

A standing has been taken up at the top of the Premier League table, with a five-point lead held over the chasing pack, and the Blues are counting down the days to a last-16 meeting with Borussia Monchengladbach in the Champions League.

Guardiola oversaw a domestic treble in 2018-19, becoming the first side to achieve that feat, but could go one better in 2021 as he seeks to emulate the efforts of Bayern Munich and his former Barcelona side by sweeping aside all before him.