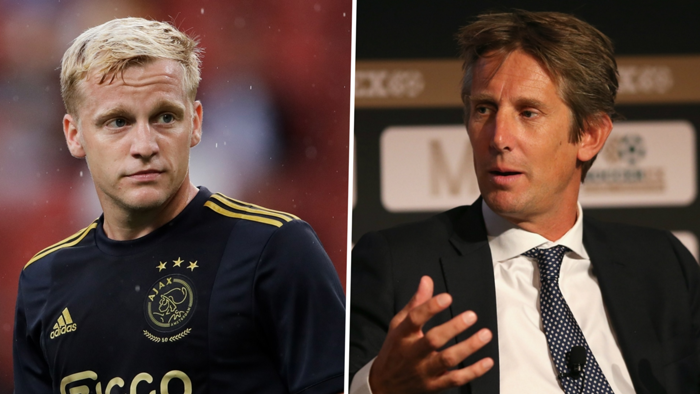 Questions have been asked of whether reinforcements were required in that area, given that Ole Gunnar Solskjaer can already call upon the likes of Paul Pogba and Bruno Fernandes.

Van der Sar is, however, confident that theversatile 23-year-old playmaker will prove his worth and add similar qualities to the United ranks as those once provided by an all-time great.

The former Red Devils goalkeeper, who sanctioned themove for Van de Beek in his role as chief executive officer at Ajax, told United’s Group Chat : “He can play in different positions in midfield – he can be a six or an eight or a 10, he has a great eye for a goal. His technique is brilliant, he can go box to box.

“I’d compare him a little bit to Scholesy, although Scholesy had a cracker of a shot from 30,40 yards out and that’s not Donny’s strength, but he likes to come into the box and chip in with goals.

"Maybe it’s unfair to compare him to Scholesy actually, but he’s a good lad and I’m sure he’ll be a great addition to the team that Ole Gunnar Solskjaer is creating for United.

“I presume he’s had a talk with Ole and they’ve talked about different positions. He’s multi-functional, he can play a little bit deeper which I think is his preferred role.

“Of course, we know United already have a couple of great midfield players there so he will find his way in the team and also with the amount of games that top clubs need to play this year in the Premier League and Champions League and the cup matches, everything is quite intense so you need a good, wide squad and I think the midfield looks okay at the moment for United.”

Van der Sar saw out his playing days with United before heading back to his roots in Amsterdam and taking on a new challenge off the field. He is proud of Ajax’s productivity when it comes to youth development , with Van de Beek the latest entry on a long list of success stories.

He added: “We know that Ajax is a club that develops young players, it’s very similar to United. I saw that in my six years there and you had players like Gary Neville and Ryan Giggs, and now you have Mason Greenwood, Marcus Rashford, Scott McTominay, Brandon Williams.

"United is also a club that gives chances to young players and of course you guys have the financial power to really get players to a high level.

“Our league is not as strong as the top five leagues and that’s why we’re in the position that after two or three years when a player gives their all to the club, wins trophies, scores goals, at a certain point we allow the player to take the next step.

”I think we work in good faith with the player, the agent and the family to find the right club and the right path to develop yourself and get to a high level. At a certain point that level is so high that other clubs would like the services of the player, that’s the way we operate in Holland.

“For us we lose our best players and somehow from the middle and bottom we need to grow again. You guys can replace a player with a top player, that’s the difference between United and Ajax.

"Of course, it’s a good thing that we, let’s say, ‘lose’ players because we can give a chance to younger players who are maybe getting anxious wanting playing time and wondering where they fit in.

“So in that way we can keep the system rolling in my view, but the main thing is also our aim in Europe. Of course I’d rather keep Matthijs de Ligt, Frenkie de Jong, Donny van de Beek and Hakim Ziyech as that would probably bring us more success in Europe.

"But for their development then they take the next step to a big European competition, and that only gives credit to our coaches, the youth academy and the people who invest a lot of time in making the players better.