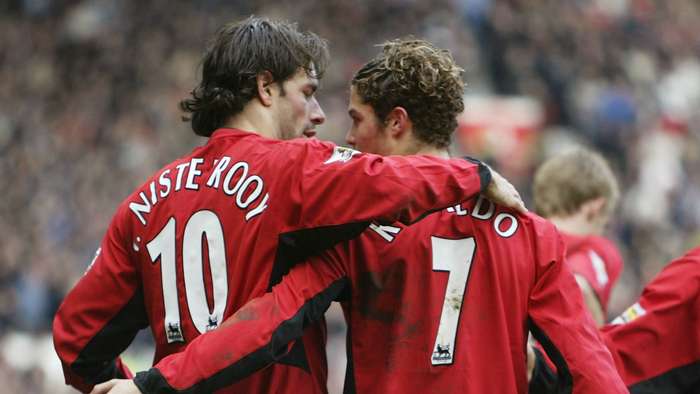 Ruud van Nistelrooy has been lifting the lid on life alongside Cristiano Ronaldo at Manchester United, with the Dutchman admitting that a modern-day superstar had to learn how to be “effective” at Old Trafford.

A talented teenager was snapped up by Sir Alex Ferguson in the summer of 2003 after catching the eye at Sporting, but arrived at Old Trafford as a tricky show pony that was more at home dancing past opponents than putting the ball into the back of the net.

That changed across six memorable years in Manchester, with Van Nistelrooy playing a small part in the creation of a football icon.

Van Nistelrooy, who was already at United when Ronaldo arrived,told Rio Ferdinand’s FIVE channel on YouTube of his first impressions of a man who has won the Ballon dOr five times: “It was clear what we said in the dressing room. We were saying to each other ‘this kid is unbelievably talented but we’ve got to help him to become effective’.

“As a 17-year-old boy, he joined United and we played against him in Sporting in pre-season and I remember the manager asking a few of our players ‘what do you think of that kid? We need someone who can get one-on-ones with defenders, create new situations, to dribble’. I remember saying ‘unbelievable talent’.

“When he joined, that’s what I saw with him. Of course, at 17 you need two or three years to adapt and then… wow… what happened then, he was unbelievable.”

It did not take long for the Portuguese to realise that, with hard work on and off the field, he could become one of the most fearsome forwards in world football.

He hit 42 goals when claiming the first of his Ballon dOr titles in 2007-08 and left United for Real Madrid a year later with the target having been found on 118 occasions through 292 appearances.

Records would continue to tumble around him in Spain, with an enviable collection of major honours being added to the Premier League, FA Cup, League Cup, Champions League and Club World Cup crowns he claimed in England.

While Ronaldo is now 36 years of age and has experienced just about every emotion that professional football has to offer, he was a starry-eyed youngster when acquired by United.

Some tough love was required in a bid to toughen him up, with Van Nistelrooy admitting that he handed some of that out when famously making a promising team-mate cry after one untimely training ground row that occurred in the wake of Ronaldo losing his father.

“Everything in the press is going on about that particular incident and also I commented on it, I’m happy to do that again because I know that I was wrong in that situation,” Van Nistelrooy, who also briefly worked with Ronaldo at Santiago Bernabeu, added.

“I immediately walked into the dressing room and sat next to him and I apologised for my behaviour when I’d calmed down.

“That frustration is coming from somewhere. Now when you’re 44 you look back on things and you know that when things are going on around you in your private life sometimes it can make you frustrated.

“In that incident it led to a discussion with Cristiano. But, of course, you need to realise and be big enough to acknowledge that.”