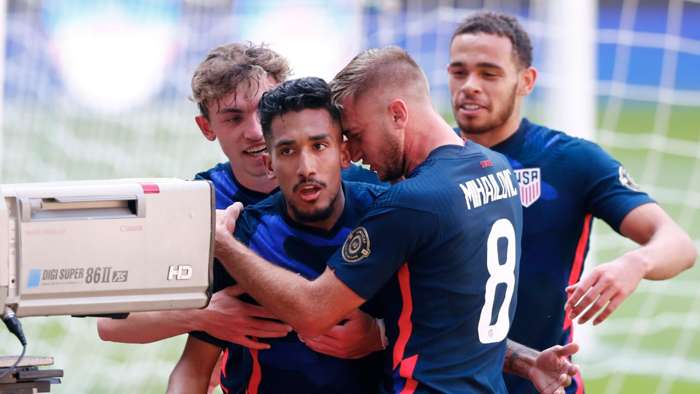 When it comes to tournament soccer, the most talented team doesnt always win. These competitions are often sprints, not marathons, and the teams that find themselves successful during those sprints are the ones that find a way to avoid those little moments that cause others to stumble.

The victorious teams are the ones that avoid those silly yellow cards and backbreaking reds. Theyre the ones that can put together results even on their off days, collect three points and get out of Dodge. And, perhaps most importantly, theyre the ones that can manage their schedule, knowing when to move players in and out and when its safe to take the foot off the gas for a quick breather without squandering it all.

That is the challenge that the U.S. U-23 mens national team faces on Sunday when they face the Dominican Republic, fresh off a lopsided loss to Mexico, in the second match of their CONCACAF Olympic qualifying run. The U.S. is certainly the more talented team and, after their win over Costa Rica in their opener, are now favorites to advance from this group stage scenario and into the almighty knockout rounds.

But on Sunday, the U.S. U-23s biggest task may not be the Dominican Republic team that stands across the field from them. Rather, it will be managing themselves and their own fitness while positioning themselves for the important games ahead.

“We’re considering all options, there’s no doubt about it,” U.S. head coach Jason Kreis told reporters when asked about managing his squad. “We feel that we’ve got an extremely deep team with a ton of experience. I wouldn’t see any reason why we couldn’t have the majority of these players contributing for us, either in this game or the next game.

"Three games in a week for players that are at the fitness levels that we’re at, inpreseason basically, I think would be a lot to ask.So yeah, we are considering some rotations.”

On Sunday against Costa Rica, the U.S. looked, for lack of a better word, exhausted. The 1-0 win was a drag of a game, one devoid of much style but, ultimately, one where the U.S. came out on top. But they did so by the skin of their teeth, with the players on the field giving every last ounce of energy to claim those vital three points in their first competitive game in nearly six months. By the time the final whistle blew, several U.S. players were spent, with cramps claiming the legs of several key starters.

And, because of that, as Kreis said, some rotation will be key. The U.S. cannot qualify for the Olympics with only their 11 best players because, by the time the knockout rounds roll around, those players will be mincemeat if not given rest.

The question is how much is too much, and how little is too little? Its a fine line to walk for a team still learning to play with one another and still trying to fit into this system. Kreis has plenty of healthy players ready to go, with some expected starters initially on the bench in the opener. The question, then, is how to move things around while avoiding what looks like an obvious trap game against an unheralded underdog?

One such position that rotation should be expected is up top, with goalscorer Jesus Ferreira a candidate to come out of the lineup after going down with an apparent cramp in the second half of Thursdays win. In could come Sebastian Soto, a more than capable scorer himself with two goals for the senior team.

Kreis will also likely make some changes in the midfield, an area of the field that did prove a position of concern against Costa Rica. Captain Jackson Yueill, a senior team veteran, was all but man-marked out of the game, putting pressure on the likes of Hassani Dotson and Djordje Mihailovic to find a way to move the ball upfield.

And, while Dotson was one of the U.S. teams bright spots, they did struggle to find those line-breaking passes required to open up Costa Rica. Kreis says that those passes arent just the responsibility of the midfield, though, as he looked to the defense, which could also be an area of rotation due to a Justen Glad yellow card.

Julian Araujo, Sebastian Saucedo, Andres Perea and Johnny Cardoso all came in as substitutes on Thursday, and one would expect at least a few of them to move into the starting XI going forward.

“We had a couple of players that that were in the same situation as Jesus, where their muscles were cramping,” Kreis said. “This is due to a little bit of dehydration. A lot to do withaltitude and a lot to do with the fact that it’s all of these players first game in a very long time.

"As I said before the game, we’re not quite match-fit yet, but we’re hoping to continue to build that fitness and build that soccer form as we move forward in this tournament.”

With a win on Sunday, the U.S. will all but assure themselves a spot in the semifinal round while making the group stage finale, a heavyweight battle with Mexico, a game that becomes a bit less do-or-die. If the U.S. takes care of business on Sunday, the meeting with El Tri will become one about seeding, not their tournament lives.

“I think we’re in a good spot,” Kreis said. "Ultimately, we’re really, really pleased with the result, really pleased to win our first game in the group. It was a big objective for our team in this tournament, but also I think we were left wanting more. The entire team knows andthe staff knows that we could have played better. It’s our objective to not only win games but in a certain way.