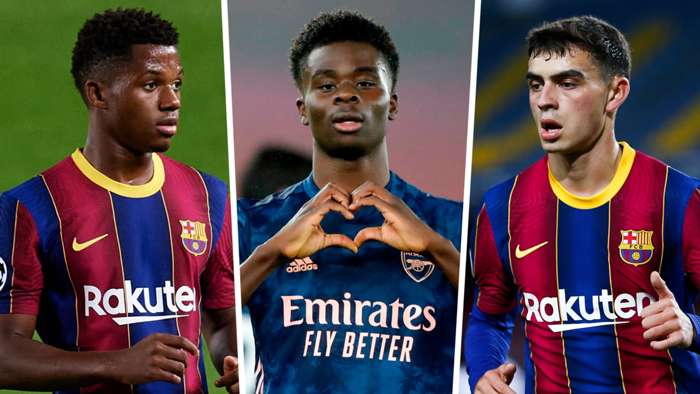 With Arsenal’s season on the verge of collapse on Thursday night, the ball found its way to Bukayo Saka on the right wing. Within a few seconds, a Europa League night that was heading for disaster had been turned on its head.

Pierre-Emerick Aubameyang may have been the man who scored the goal to put Arsenal through against Benfica, but it was Saka who ensured the Gunners skipper couldn’t miss.

With the clock ticking down and crisis point looming, most players would have just fired the ball aimlessly into the crowded penalty area with the hope someone might get on the end of it.

But having been found by Martin Odeegard, Saka showed no sign of panic. He tookhis time, created some space with a stepover and whipped in a cross to the back post that was begging to be turned home.

Arsenal’s star boy had done it again, just when his side needed him the most.

Given what Saka is doing on a weekly basis, it’s easy to forget that he is just 19.

English football is currently blessed with a plethora of exciting young attacking talents: from Jadon Sancho dazzling at Borussia Dortmund to Phil Foden playing a pivotal role in Manchester City's march towards the Premier League title.

However, in Saka, Arsenal have themselves a gem who compares favourably to the most promising players in the game today.

“How good can he be is a question nobody can answer,” Arsenal boss Mikel Arteta.“He is a boy that is constantly willing to learn, to get better, to work on the things he can do better and he isvery humble and hard working.

“When that happens, and you have the talent he has, normally you can go a long way.”

With six goals and six assists to his name, Saka now has 12 direct goal involvements this season–only Aubameyang (14) and Alexandre Lacazette (13) have more at Arsenal.

He may still be a teenager, but he is already firmly established as one of the leaders in Arteta’s side.

Arsenal were 15th in the Premier League when they lost at Everton on December 19, and just four points off relegation.

Since then, Saka has scored five goalsand set up another four. He has almost single-handedly dragged his side away from the drop zoneand now he has sent them through to the last 16 of the Europa League.

A glance at the action areas from Thursday night’s win against Benfica tells you all you need to knowabout Saka’s importance to this Arsenal side.

A mammoth 48 per centof all their attacks went down the right flank. Wherever Saka goes, the ball follows. His team-mates now look to him whenever they can, as they know he is their best chance of making something happen.

“He’s in a great moment, he's full of confidence," Arteta said last week. “He's been really important in recent results.His form is probably the highest that it's been since I've been here and he's been really consistent.

"He needs to keep going and we need to be wise with him because at the moment he's a big part of the team.”

Since the start of last season, Saka is the youngest Premier League player to be indouble figures for goals (10) and assists (18) across all competitions.

And when you compare him to Europe’s top performing teenagers, he is right up there too.

Indeed, with six goals,he has scored more than Barcelona duo Ansu Fati (five) and Pedri (three), and Borussia Dortmund’s Jude Bellingham (one) and Giovanni Reyna (four). He also has more assists than all four of those players since the start of the campaign although Fati has been absent through injury of late.

It’s rare that a player who is so young takes on so much responsibility at a top club.Sometimes they are so good, however, that a manager can’t afford to hold them back.

Arteta has spoken at length about needing to protect Saka from the pressure of expectation, but the level of his performances –no matter the opposition – make it almost impossible to do that.

Such is the teenager’s importance to Arsenal now that he has played 2,496 minutes across all competitions so far this season –no other outfield player has totalled more for the Gunners.

Since missing the 0-0 draw with Manchester United on January 30, Saka has been on the field for all but one minute of Arsenal's six games throughoutFebruary.

Arteta is aware of the youngster'sneed for a rest, but knows he must find a balance between easing Saka'sworkload and ensuring his side still has the best possible chance of getting results.

“On Thursday night (against Benfica),at some stages in the game we were thinking about that because you could see signs of tiredness," the Spaniard told reporters ahead of Sunday's Premier League clash with Leicester.

“But obviously when things go well, the energy that creates sometimes overcomes fatigue and I prefer not to talk too much about fatigue anyway.

“If we have to rest players, we have to rest them, because we have to keep them fit as much as possible. But you also have to develop that mental toughness that you need when you are in competitions you want to win.”

Arteta added: “There are things and professions that are much harder than ours where people keep on going and going – like when someone is running a marathon and chasing somebody.

“So, fatigue is a lot of times mental, because if things go well and you score a goal, I'm sure you will still have the energy to sprint and celebrate that goal.

“But when you have to track someone back, you say you're tired? I don't really agree with that; if you are on that pitch – until you are absolutely done – you have to give your best.”

Arteta is expected to make changes against Leicester, with the Europa League and the upcoming last-16 tie with Olympiacos clearly now Arsenal’s priority.

The Gunners sit 11th in the Premier League ahead of the trip to the King Power and that lowly position would be an awful lot worse had it not been for Saka's recent heroics.

Arsenal’s young staris known as ‘Little Chilli’ by his team-mates. “It’s because he has so much energy, so much power,” explained Aubameyang.

Saka has certainly been too hot to handle for plenty of teams in recent weeks but, on Thursday night, he showed he had ice in his veins when he produced the moment of quality that decided the tie in Arsenal's favour.

Arteta’s side were staring into the abyss in Athens but now they can continue to dream of Europa League glory, and the Champions League place that would come with it.