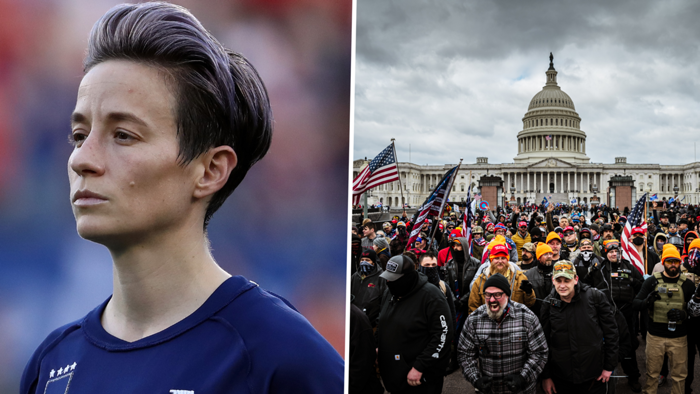 Trump has been heavily criticised for inciting the mob, which backed the president's false claim that the election had been stolen from him due to voter fraud.

Rapinoe has never been shy about critiicising Trump and did so again in a call with reporters on Tuesday.

"The vice president of the United States was in the halls of congress, as were congresspeople and senators alike, and all the people that work in that building as well, from the staff tothe Capitol Police."

Rapinoe said that the riot was not an aberration when viewed in the context of U.S. history,but rather it was in keeping with America's tradition of violence.

"To see where we've come in these four years has been devastating and hopefully the final straw for so many people to really understand that the reason that we're here is because we never have actually had a reckoning with what our country really is. This is America. Make no mistake about it," Rapinoe said.

"Anunleashing of a white supremacistmob is nothing new to America as people of color,black and brown, know very well.If we do notpunish this and investigate this to the fullest extent it only encourages more of this to happen."

Though there were several casualties, the incident could undoubtedly have been worse.

Some rioters were seen with zip ties that could have been used to take hostages, while video showed several in the crowdchanting they wanted to hang U.S. Vice President Mike Pence, who was sheltering in the building.

"We should not underestimate what could have happened,we saw people with weapons and people with zip ties," Rapinoe said."They put up a gallows outside the Capitol building where they were chanting to hang the vice president of the United States.

"I think that we should make no mistake about what the intent was behind it, andit was a murderous mob. Five people are dead and we can't bring them back.

"The utter bottomlessnessof some of these lawmakers to continue toincite violence and still call for overturning theelection when the mandate has been given by the people of the United States is just absolutely insane. They should be held accountable.