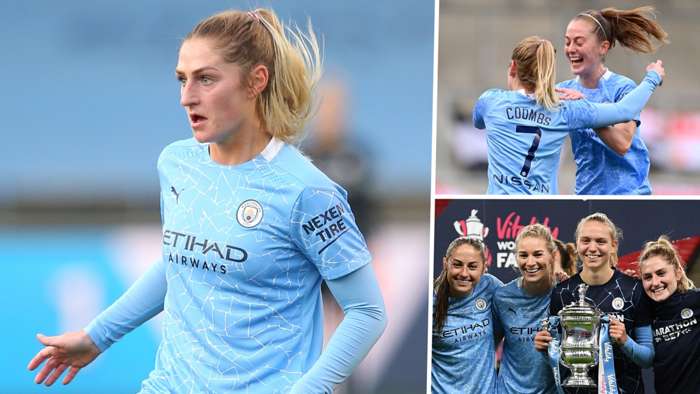 When Manchester City went 2-0 up against Manchester United on Saturday, you’d have been forgiven for forgetting there were no fans at Leigh Sports Village.

While City had less to celebrate come full time, as United mounted a spirited comeback to draw 2-2, the game itself was another reminder of Coombs’ superb form over the last few weeks.

Despite the arrivals of Sam Mewis and Rose Lavelle, the United States’ World Cup-winning duo, the former Liverpool star has risen to the challenge of increased competition in midfield, despite only starting one Women’s Super League game in the entirety of last term.

“She’s comfortable on the ball, really intelligent, picks up good positions on the pitch and she’s added goals to her game now as well.

“She’s earned her place in the team and there’s a lot of competition in her area of play. That’s probably the highest competition we have, the attacking midfield positions.

“But she’s adaptable, she can play in the holding position as well. Good players can play anywhere and she’s a good player.”

Coombs’ performances are all the more impressive given the chaotic start to her City career. The 29-year-old was brought in last summer by former head coach Nick Cushing, but wouldn’t start a league game for her new club until December, due to injuries.

The way Cushing managed his new players, he tended to ease them in too, so her opportunities didn’t come as thick and fast as she might have liked once she was back to full fitness.

“It takes time for players to get into the rhythm of how we tactically work,” Cushing explained back in January, speaking about Coombs’ limited game time after she had starred in a Continental Cup win over Sheffield United.

“She’s missed out a lot of games and she then got an injury when she was playing well.

“For her, it’s about now training to get consistency in performance, in understanding, to try and get more and more games.”

The impact of the Covid-19 pandemic, which would bring the 2019-20 WSL season to a premature end, limited how much she could rise to that challenge, and when the new season rolled around, Coombs had a new manager to impress, with Cushing leaving in February to join New York City FC in MLS.

When new boss Taylor brought in Mewis and Lavelle to strengthen a midfield department that Cushing had already dubbed as “hard” to break into, the challenge rose. But Coombs has risen with it.

Days after winning her first trophy with the club, the Women’s FA Cup, Coombs scored a stunning goal in the Continental Cup against former club Liverpool at the beginning of November, flicking the ball over her own head with her first touch before lifting it over the goalkeeper’s with her second. Since then, she hasn’t stopped scoring.

Against Bristol City, it was her goal that put Taylor’s side 2-1 up and on their way to an 8-1 victory, after Bristol had pegged their high-flying opponents back with an 11th-minute equaliser.

It was a goal that showed just what she is about too - a lung-busting run from deep creating the opportunity, before an emphatic finish followed.

After two great strikes in back-to-back games, Sunday’s goal in the Manchester derby didn’t disappoint either. When Mewis’ effort was blocked, Coombs was the player alert to the loose ball, latching onto it and thumping it into the top corner from the edge of the box.

It may not have helped City get the result they wanted, but it was yet another step in the right direction for a player whose City career has been stop-and-start for so many reasons.

“I came here to be better and I knew it would maybe take some time. I’m going to be patient with it but I’m not here to make up the numbers,” Coombs said back in December 2019, in an exclusive interview with Goal.

“I really want to push for a place and help the team where I can. As weeks go by, I just want to make sure that I’m feeling fitter and becoming a better player.”