There was no pressure to replace Ronaldo for Portugal - Jota 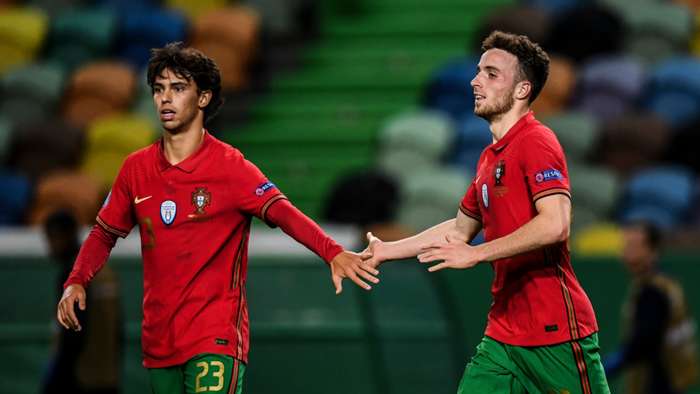 Diogo Jota felt under no added pressure to fill the void left by Cristiano Ronaldo after starring for Portugal in Wednesday's 3-0 Nations League victory over Sweden.

Jota was recalled by Fernando Santos for only his second start in Portugal colours, with Ronaldo absent after testing positive for coronavirus on Tuesday.

And the 23-year-old, who joined Liverpool from Wolveslast month, described the day as his best as a footballer.

"It was an excellent night, and one of my best performances for my country," he said. "We had a great result against a Sweden side that is not easy to play against, so we can be proud.

"The coach chooses the eleven for each game. I did my best on the field.

"There was no pressure to replace Ronaldo. We are professionals and, if the boss chooses eleven players to enter the field, these are the ones who have to work.

"I think this is my highest moment. Joining Liverpool was a big step in my career, and today I started again in the national team, I have to keep doing my best."

Portugal have won three and drawn one of their opening four Group A3 matches and lead France - 2-1 winners against Croatia in Zagreb - on goal difference.

On the back of successive 0-0 draws with Spain and France, Santos was satisfied with his side's performance against out-of-form Sweden.

"I think we controlled the game, even though I think Sweden could have scored a goal. It was not a 'top, top, top' display, but it was good," Santos said.

"The result itself is excellent. As for the game, there were very good aspects and other less good things.

"We had 20 very good minutes when we controlled the match well. But we also had difficulty with Sweden's football, with long balls, aggressive play, putting four men up front."

Marcus Berg hit the post for Sweden at 1-0 and Rui Patricio was called into action three times in the second half.

Sweden boss Janne Andersson was issued a yellow card for protesting a decision that went against his side, meaning he will miss next month's game with Croatia.

"It's not good. You should not be suspended as the leader," he said. "There is nothing I am happy or proud of.