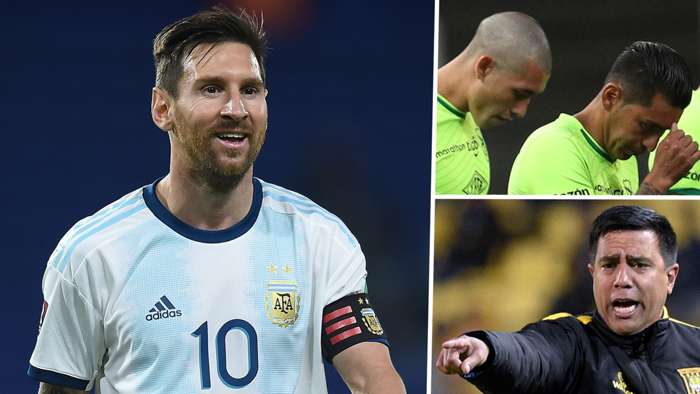 As opening fixtures for World Cup qualifiers go, they do not get much more daunting than the double-header Bolivia face to kick off their quest to reach Qatar 2022.

Not since 1994 has Bolivia qualified for a World Cup finals, finishing second-bottom in the qualifierslast time round with just four wins in 18 games, and they have started in disappointing, if entirely predictable fashion. Neymar and Brazil doled out a fearsome beating in the first round of Conmebol qualifiers on Friday, walking away 5-0 victors and, given the chances missed by the hosts, it could have been even more humiliating.

Tuesday's second match will be a different story, given the immense natural advantage Cesar Farias' charges enjoy in the near-4,000m altitude of La Paz against their rivals forced to trek up from sea level. “They will be two very different games, in different topographies,” was the rather curiousphrase the coach used in his press conference prior to Argentina's visit.

But despite holding back several key first-teamers from the Brazil match, the Venezuelan boss will still be in for a tough afternoon against Lionel Messi and his team-mates.

And on Monday, just over 24 hours before kick-off, Farias was the subject of a formal complaint from the FIFPRO world players' union to the FIFA Ethics Committee, confirming a previous accusation filed by its Bolivian equivalent, FABOL.

It is yet another headache for a team whose preparations for the qualifiers have been troubled to say the least. Just five of Bolivia's squad are based overseas, including legendary striker Marcelo Martins, who was excused from the Brazil game in order to acclimatise to La Paz's altitude and be in top shape against Argentina.

The rest belong to teams in a league which has been halted since March due to the coronavirus pandemic, meaning that Friday's defeat was their first competitive outing in almost seven months.

To make matters even worse, the only two Bolivian sides who have played, Libertadores participants Bolivar and Jorge Wilstermann, refused to release their players, while Oriente Petrolero forced their three internationals to abandon the team hotel on the orders of the club president, ex-Verde enforcer Ronald Raldes. “I am not going to tell you not to leave but I want to be honest with you,” Farias was caught telling one of the affected players, Ronaldo Sanchez, as he left.

“Once you say no to the national team, I will think of somebody else.”

At the root of this strife is the disputed presidency of the Bolivian Football Federation (FBF), whose previous holder Cesar Salinas passed away in July after contracting Covid. Marcos Rodriguez and Robert Blanco, two of Salinas' vice-presidents, both subsequently claimed interim possession of the role, leading to a vicious power struggle that has divided the nation's football and deepened its crippling crisis.

While Rodriguez has received the support of the FBF and eight clubs, Blanco is backed by six top-flight teams – including Bolivar, Wilstermann and Oriente Petrolero, the reason for their refusal to cooperate with what they see as an 'illegitimate' national team– and in August occupied the Federation's offices in Cochabamba, leading to an impasse that has further delayed the return of competitive football following the pandemic.

In the meantime, hundreds of players remain in the gravest of financial situations, with the vast majority owed months of back-wages by clubs who have received almost zero income over the last six months and others, such as San Jose and Aurora's footballers, who have been furloughed without pay or training since May.

Even if the dispute between Rodriguez, Blanco and their respective backerscan be solved, the football in the countryfaces further potential disruption in the form of upcoming presidential elections.

Since November 2019, when President Evo Morales was forced out of office and into exile in neighbouring Argentina, Bolivia has been under the de facto rule of senator Jeanine Anez, whose appointment was backed by the military and the right-wing opposition to the nation's first indigenous head of state.

Anez will not be running for president in October 18's polls, calling instead for supporters to vote for Carlos Mesa, who was beaten by Morales in 2019's disputed elections which led to massive protests and dozens of deaths nationwide.

Evo will not run either, having been barred from seeking another term by the courts; his MAS party will present ally Luis Arce as its candidate. Most recent polls suggest that while Arce will win, he is unlikely to gain 45 per cent of votes that would seal his victory in the first round, leading to a run-off with runner-up Mesa on November 29.

Ex-president Morales has warned of the possibility of fraud against his party, while other MAS figures allege that the de facto government and its allies will not recognise their victory, leading to an effective coup d'etat. Whether those concerns are justified or not, all indications point to yet more potential for disturbances in Bolivian society, making the return of football before the end of 2020 an even more remote likelihood.

Farias, the ex-Venezuela boss who became the Verde's 10th coach in six years when he took over last year (having previously held the job on an interim basis), is nevertheless putting a brave face on matters. “We have some experienced players, who have played a lot of qualifiers, and they are waiting to play Argentina,” he explained after the Brazil thrashing.

“These are two diametrically-opposed circumstances. We will have to change a lot of things because the results are a product of our work.

“Bolivia need a change and if we don't dare to do this kind of thing it will be very difficult.”

In the absence of competitive league football Farias has had the bulk of his squad ensconced in La Paz and Santa Cruz for almost two months in preparation for the Argentina game, effectively conceding defeat against Brazil before a ball was even kicked in the hope of going all out for victory in La Paz.

With the likes of Martins, Alejandro Chumacero and new sensation, SPAL teenager Jaume Cuellar, on the pitch, the Verde will be gunning for an upset along the lines of that unforgettable 6-1 demolition of Diego Maradona's Albiceleste back in 2009.