The King of Lyon: Are Real Madrid in danger of losing brilliant Benzema? 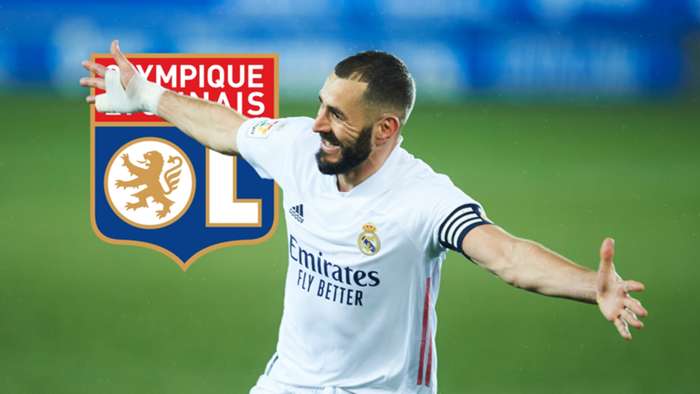 When Karim Benzema left Lyon to join Real Madrid in 2009, they had recently been deposed as Ligue 1’s dominant club.

Laurent Blanc’s brilliant Bordeaux side, inspired by the genius of Yoann Gourcuff, and Marseille had relegated them to third in France after seven successive seasons of winning the title.

They have been seeking to recapture the magic they lost ever since.

Rudi Garcia’s troupe, meanwhile, have given it as good a crack as any in recent years. Led by Memphis Depay, they lie third in Le Championnat, three points behind leaders Lille with nine matches of the campaign remaining.

On Sunday, they visit Paris Saint-Germain, knowing that a repeat of the 1-0 victory they enjoyed in December would transform the possibility of becoming Ligue 1 champions from a mere hope to a genuine possibility.

In Spain, meanwhile, Benzema is doing everything in his power to keep Real Madrid competitive. Now 33, he continues to be Los Blancos’ offensive powerhouse since the departure of Cristiano Ronaldo to Juventus in 2018.

In each of the two previous campaigns, he has notched 21 goals in La Liga. This season, he is already up to 17 and is proving inspirational as Madrid continue to battle for silverware at home and abroad.

With their league hopes hanging by the balance against Elche last weekend, he scored a textbook downward header then a brilliant late winner to turn a 1-0 deficit into a priceless 2-1 victory.

He netted a crucial opener in the Champions League against Atalanta as Madrid progressed into the quarter-finals and then, wearing the captain’s armband, secured a brace in a 3-1 win away to Celta Vigo on Saturday.

His thoughts, though, will soon turn to his future plans. Those at Lyon hope it will lead him back to his home city, where he came through the academy andscored 64 goals in 148 outings - establishinghimself as a major world star before moving to Spain.

The suggestion that he might one day return to Lyon really caught light againin January, when his former agent and close confidante Karim Djaziri spoke to Inside Gones.

“Will Karim Benzema return to Lyon? Yes, I think it’ll happen,” he said. “He speaks to me regularly and he watches all the matches. And he’s not yet visited the Groupama Stadium.

“There is everything at Lyon for Karim. He doesn’t want to come back to Lyon and not have his legs. He is torn between leaving the biggest club in the world and returning to Lyon. It’s a question of timing.”

Lyon, meanwhile, have already made informal contact – and they are clearly keen for a deal to be done.

President Jean-Michel Aulas told RMC last month: “I know there was contact last year with [sporting director] Juninho. If it’s possible, obviously solutions will be found to allow it to be done.

“It would be a dream for all our supporters but it shouldn’t be done too late. Why not? It all depends, I think, on the results of Madrid.”

Perhaps a greater driving factor for any deal is less the results that Los Blancos achieve and more who they can sign to replace their grand old forward.

If Erling Haaland, for example, was to arrive in the summer, Benzema, a four-time Champions League winner, is unlikely to kick his heels on the bench for a full season waiting for the last year of his contract to expire.

And the Borussia Dortmund prodigy is hotly linked to the club. For Benzema, though, such rumours are just noise for now.

“I’ve been here for a long time and every year we talk about strikers who could score goals for Real Madrid,” he said. “Haaland is a young player who scores a lot of goals – that’s all.

“And if one day he has the chance to come to Madrid, and if he wants to, he would join us. That’s it.”

With other areas in the squad to address, most notably in the wide attacking zones, Madrid may feel they have different transfer priorities this summer, especially if PSGs Kylian Mbappe comes on the market.

Head coach Zinedine Zidane, meanwhile, is clearly in no hurry to offload Benzema.

“Since he joined Madrid in 2009, he has only improved. We don’t know when he will stop,” the World Cup winner said.

Individually, Benzema does indeed remain on course for perhaps his greatest campaign ever, and as unfashionable as he may be, the void he would leave in attack would take some filling.