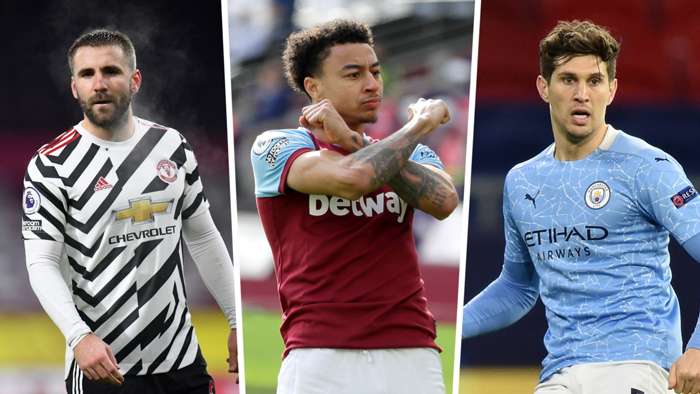 Gareth Southgate has explained why he has recalled Jesse Lingard, Luke Shaw and John Stones to his England squad.

Southgate named his final squad for this months 2022 World Cup qualifiers on Thursday, drafting an in-form trio back into the fold while leaving out several high profile names .

Lingard has enjoyed a resurgence since joining West Ham on loan from Manchester United, while Shaw has shone at Old Trafford this season and Stones has helped City fight for the quadruple, with Southgate certain all three men can transfer their form to the international stage.

"There has never been any question in my mind about the quality of all three players. All have had difficulties mainly because of injury," the Three Lions boss told reporters after unveiling his squad.

"Jesse, of the three, is a bit more fortunate to be in. Luke and John have performed over a period of time. We have got injuries in that area that have opened up an opportunity for Jesse.

"I have to say that his performances for West Ham have been excellent. He has four goals in six games. We know he can perform at the level.

"We know he has been a really good member of our squad, both in terms of his general link up play and he has scored goals as well.

"There is no doubting quality. Ideally, you say you need to do it for a little bit longer. But thats not been the option this time around.

"We lost the likes of Jack Grealish, Jadon Sancho, Harvey Barnes and James Maddison. There is a space there and we trust Jesse and think he can play a big part in the next few games."

Lingard hasnt played for his country since June 2019, with a lack of regular minutes at United costing him his place in Southgates set-up.

Stones last appearance for the Three Lions came in November of the same year, while Shaws last call-up came way back in September 2018.

Both men fell out of favour amid struggles for form and fitness at club level, but have rediscoveredtheir best form in the 2020-21 campaign.

Lingards international career appeared to be over in 2020 as the midfielder fell way down the squad pecking order at Old Trafford, with the Red Devils eventually deciding to send him out on loan to West Ham in the winter transfer window.

However, the 28-year-old has played his way back into contention since joining the Hammers, scoring four goals and recording two assists in his first six Premier League appearances for the club.

Southgate added on Lingards return to form at the London Stadium: "We werent sure how it would work out. We were able to give Jesse a great reference in terms of experience with him.

"We were just relieved he was back playing football. I think it is one of those moves that has worked for everyone.

"I can only reiterate that ideally you would see that over a longer period of time and I cannot dispute. We know the quality and level he can play at. He has got a great opportunity now."

England have been drawn in Group I for their latest World Cup qualifying campaign alongside Albania, Andorra, Hungary, Poland and San Marino.

Southgates side will return to action with a home fixture against San Marino on March 25, before facing Albania three days later and wrapping up the month with a clash against Poland.

Will Bamford play for England or Ireland?