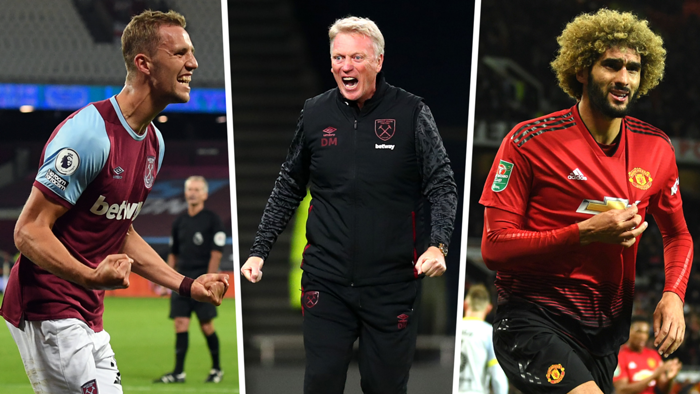 Jose Mourinho admitted that West Ham were worthy of admiration for a hard-fought point against Tottenham on Sunday, calling out Tomas Soucek as David Moyes' "newMarouane Fellaini"as his opposite number excused his celebratory dancing as "a David Peat moment".

But the hosts were unable to kill off the resilience of their opponents andFabian Balbuena's 82nd minute header handed them a lifeline as the game entered its closing stretch.

Davison Sanchez then turned a cross into his own net three minutes later to put West Ham on the cusp of the most unlikely of comebacks, beforeManuel Lanzini's incredible curled finish with the last kick of the game deep into injury time sealed a magnificent point.

In a game that saw Gareth Bale make his long-awaited return to the club off the bench, Mourinho was left to rue a second late capitulation in the space of three Premier League games, following on from their draw with Newcastle last month.

Speaking after the match, the Portuguese paid tribute to his opponents while singling out Czech Republic international Soucek for praise, comparing him to former Manchester United star Fellaini, whom both Mourinho and Moyes coached during their time at Old Trafford, with the latter bringing him with him to the Theatre of Dreams from Everton in 2013.

"I told them to be aware of set-pieces against, which we knew they were very strong," he told Sky Sports."David found in Soucek his new Fellaini. They fought very hard to be lucky, so I praise them.

"This is a game that was in the pocket and we lost two points."

Moyes meanwhile praised his side's turnaround while admittingthat his celebratory reaction after Lanzini's equalisercalled to mind that of former Luton Town boss Pleat, who took off across the pitch in similar fashion in 1983 when his side avoided relegation thanks to aRadomir Antic goal against Manchester City at Maine Road.

"I have just seen my celebration," he told BBC Sport."A David Pleat moment came to mind!I know someone else who has run and slid down the touchline, so I wasn't going to copy that."

"It is one of these moments you don't often get in football.At one point you're saying how bad can this get. I hadn't thought we played badly in the first half, that's what I said at half time.

"Sometimes you feel you have to do something.We didn't. We made changes later on and they certainly made a big difference.

"The plan was not to go 4-0 down.We said if we got one we would see what happened. It is a growing confidence we have at West Ham at the moment.

"It was areally good performance from the players that got us back into it. We thought we played really well, the football was good, we threatened them.

"We are playing against a team everyone is talking about and after 10 minutes I was thinking that this going to be six or seven.We changed and it made us better.