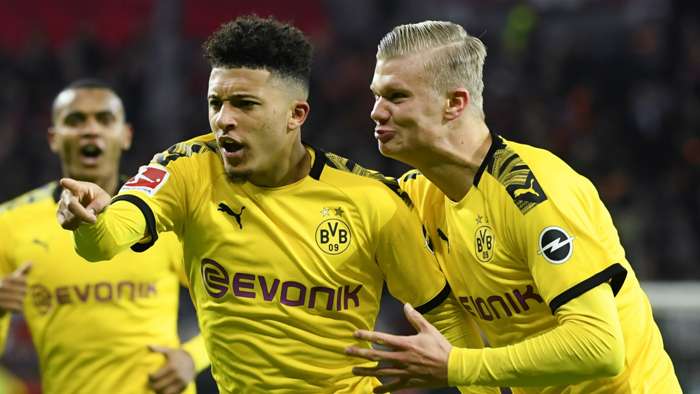 Jadon Sancho and Erling Haaland are amongthe names on the final shortlist for the 2020 European Golden Boy award.

Lionel Messi, Paul Pogba, Kylian Mbappe andMatthijs de Ligt have all won the award in the past, while last year'sprize was given to Atletico Madrid's Joao Felix following his breakthrough season at Benfica.

Sancho finished second in the 2019 voting while his Borussia Dortmund team-mate Haaland came in fourth after a prolific start to the 2019-20 campaign at Red Bull Salzburg, which ultimately earned him a move to Westfalenstadion in January.

Both men are in contention to win the prize againthis time around, with Sancho now reportedly valued at around €120 million (£108m/$140m) after another outstanding year in Germany while Haaland is attracting attention from Real Madrid after scoring 21 goals in his first 23 outings for BVB.

Elsewhere, Barcelona teenager Ansu Fati and Bayern Munich full-back Alphonso Davies have both been nominated for the second time, while Rennes midfielder Eduardo Camavinga has also been included.

Barcelona's new signing Sergino Dest has also been named in the final 20, having been rewarded for a bright start to his career at Ajax with a €21 million (£19m/$20m)move to Camp Nou.

The final winner will be decided by a panel of 40 journalists from across Europe, with a new name set to be carved on the trophy as the next generation of talent continues to emerge.