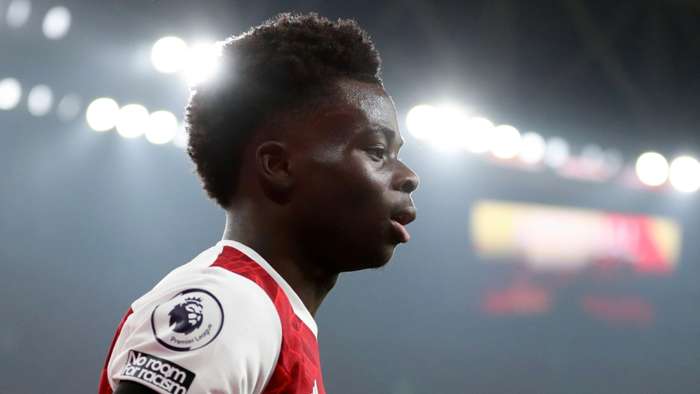 Bukayo Saka is feeling "much better"and could be involved for Arsenal intheir crucial Europa League clash with Olympiacos, according to boss Mikel Arteta.

The Gunners youngster was forced off at half-time during Sunday’s north London derby victory over Tottenham with a hamstring problem.

It was initiallyfeared he could miss around three weeks, but he has reacted well to treatment and Arteta has not ruled out the possibility of him featuring against Olympiacos on Thursday night.

When asked about the status of Saka during his pre-match press conference, Arteta revealed he had been put through a fitness test on Wednesday to see if he would be available to face the Greek champions.

“He was doing another test,” said the Arsenal boss. “Obviously he felt something muscular, but he’s been much, much better and evolving really well.

“So we will make a decision this afternoon on what we will do.”

If there are any doubts about Saka’s fitness, then Arsenal should err on the side of caution on Thursday night.

They have a 3-1 lead from the first leg and really should be able to get the job done without the 19-year-old, who has needed a bit of a rest for some time.

There is a really important game with West Ham on Sunday, so this feels like the perfect opportunity to give Saka a break and let Nicolas Pepe start on the right-hand-side of the attack.

Pepe made an impact off the bench against Spurs, playing the ball through for Alexandre Lacazette in the build-up to the penalty and he deserves some game time.

Arsenal’s squad is in very good health going into Thursday night’s game and, other than Saka, Arteta does not have any major injury worries to deal with.

“Everybody is more or less OK,” said the Arsenal boss. “We had a few doubts, but hopefully everybody is going to be involved in the squad.”

Arteta says the situation which saw Aubameyang dropped from the starting XI against Tottenham at the weekend has now been resolved.

The Arsenal skipper was left on the bench during the north London derby after turning up late for the game in what was viewed as a breach of pre-match protocol.

But Arteta is adamant the incident has now been put to bed and that his top scorer will be available to face Olympiacos.

“We talked, everything has been resolved in a really positive way,” said the Gunners boss. “So we move forward.

“Everybody has to obviously perform at the highest level to earn his place in the team and there is no exceptions there.

“We will try out a really competitive team to try and win the game.”