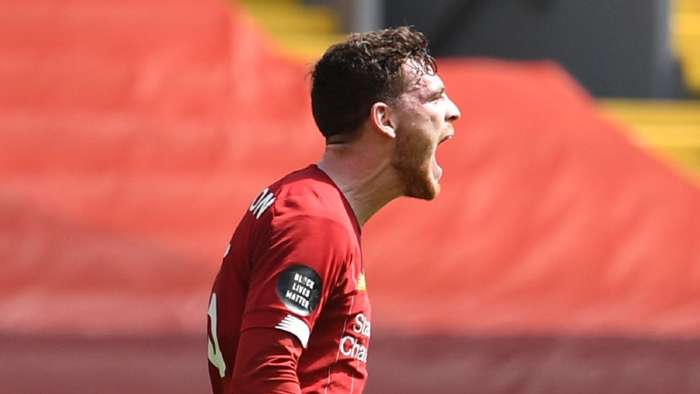 Liverpool are still “working 100 per cent” despite dropping points in a 1-1 draw against Burnley, says Andy Robertson, with the Premier League champions determined to avoid stumbling past the finishing post.

With another trophy added to the cabinet and there little more than pride to play for from this point, Jurgen Klopp’s side have seen their high standards slip since the restart in England.

They returned to action with a heavy defeat at Manchester City, while hard work was made of a home date with Aston Villa and a 1-1 draw played out when Burnley paid a visit to Anfield.

Robertson got Liverpool off to the perfect start in that contest, with his third goal of the season breaking the deadlock after 34 minutes.

The Reds were unable to build on that advantage, despite creating plenty of opportunities, and failed to emerge victorious in a Premier League fixture for just the fifth time this season as their 24-match winning run in the league at Anfield came to an end.

Robertson insists that was not for a lack of trying, with Klopp’s side working as hard as ever despite hitting their ultimate targets for the campaign.

The Scotland international full-back told BBC Sport of the joys of netting a rare goal and the frustration of being held: “The corner came back to the edge of the box and Fabinho saw the run. It was a decent header to be fair!

“Credit to Burnley but we needed to be much better than that. We dominated the first half and created a lot and they didn't really have any chances. We know with a team like Burnley, they grow with confidence when it's only 1-0.

“We have to be more clinical in front of goal. Burnley are in the position they are because they grind out the results. Fantastic squad, fantastic manager, so credit to them, but we know we can do better.

“Mo Salah had a shot in the 92nd minute that nine times out of 10 he scores, so we were still creating chances.

“We can assure you weare working 100% in training, in games. We were good enough to win the game today but didn't take our chances.”

Klopp shuffled his pack for a meeting with the Clarets, with youngsters Neco Williams and Curtis Jones handed starting berths, and Robertson sees the ongoing progress of exciting academy graduates to be a positive for the Reds on a disappointing afternoon.

He added: “They have been great all season and have been pushing the lads in their positions.

“I thought Neco was brilliant and I try to help him whenever I can as a full-back. Curtis Jones has all the confidence and all the ability in the world and he showed that in times today. Hopefully he has a big career at Liverpool.”