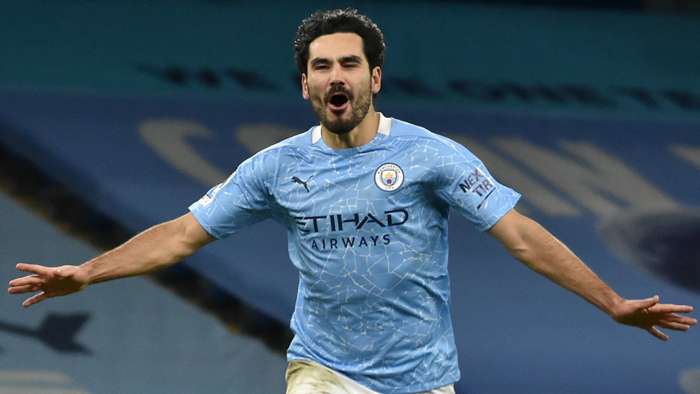 Ilkay Gundogan remains a reluctant hero at Manchester City and says he would be happy to “go in goal or play left-back or right-back” if Pep Guardiola required a positional tweak to aid the collective cause.

The Germany international midfielder has been starring for the Blues in a more advanced role this season, with the shackles shaken by a player who has often filled a deep-lying post.

Plaudits have rained down on the 30-year-old, but he claims to be merely doing his job and would have no complaints at filling any position on the pitch if is manager saw benefits to such a move.

Quizzed by Sky Sports on whether he could operate as a striker in a City system that often favours a ‘false nine’, Gundogan said: “If I have to, I am ready.

“It does not matter where my manager wants me to play. If I have to go in goal or play left-back or right-back, I will try to do my best, I will try to see what is demanded, what the manager expects from me, and try to do the best possible job.”

With Ederson continuing to provide a reliable last line of defence for City, Gundogan has been freed to focus his attention on matters in the final third of the field.

He has been faring admirably in what has already become his most productive campaign to date in terms of end product.

Gundogan has found the target on 14 occasions in all competitions, while laying on a further two assists.

There is no chance of Gundogan being asked to fill in between the sticks any time soon, with United States international Zack Steffen acting as Ederson’s understudy, but rest and rotation will be crucial from this stage.

That is because City remain in the hunt for four pieces of silverware this season, with Guardiola’s side chasing down a historic quadruple that could deliver Premier League, FA Cup, Carabao Cup and Champions League crowns to the Etihad Stadium.